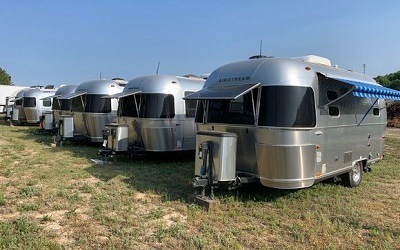 The top Airstream dealer group, for the second year in a row, was Airstream Adventures Northwest. The group has locations near Portland, Oregon; Seattle, Boise, Idaho; and San Francisco.

Dover, Florida-based Airstream of Tampa was named the top single location Airstream dealership, a repeat from 2020 as well.

“Our Airstream dealer network is the best in the RV industry, delivering an incredible level of service, expertise, and dedication to current Airstreamers and future owners across the country and around the world,” Airstream President and CEO Bob Wheeler said. “This has been a year marked by both uncertainty and unprecedented demand for our products. Our dealers have met these challenges head-on with innovative solutions, and we’d like to thank and congratulate them for their efforts.”

“I don’t know if there has ever been a better moment to honor excellence and dedication in our dealer network,” Airstream VP of Sales Justin Humphreys said. “As more people have discovered the joy of Airstreaming this year, these dealers have shown a superior level of service and sales expertise. From all of us in Jackson Center (Ohio), we thank you and look forward to a bright future for Airstream.”