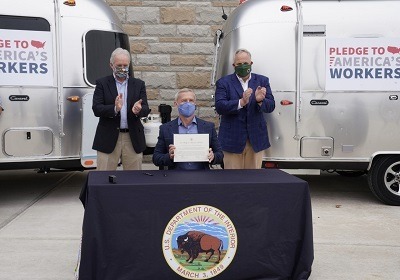 Secretary of the Interior David Bernhardt met with Airstream leadership to highlight the importance of outdoor recreation during a visit to the Airstream Factor Service Center in Jackson Center, Ohio.

At Airstream, Bernhardt discussed the Department of the Interior’s role in facilitating outdoor recreation opportunities across the country, managing 500 million acres of land and how travel trailers help outdoor enthusiasts visit America’s national parks, wildlife refuges and other public lands.

“The RV industry is an important part of our outdoor recreation economy, with millions of RVers traversing into our iconic national parks, refuges and public lands,” Bernhardt said. “With President (Donald) Trump signing the Great American Outdoors Act, we will invest billions of dollars to improve our facilities and infrastructure, so RVers and other visitors can make memories on our public lands for generations to come.”

The Great American Outdoors Act provides $1.9 billion a year for the next five years to address deferred maintenance needs at national parks, refuges, American Indian schools and other public lands throughout the country.

“The passage of the Great American Outdoors Act comes at an ideal time as many Americans are turning to RVs in unprecedented numbers to experience the great outdoors and our iconic public lands. With so many new RVers, Airstream remains committed as ever to workforce development and job creation here in Ohio,” Airstream President and CEO Bob Wheeler said. “We are excited to host Secretary Bernhardt at our Airstream facility and grateful for his leadership in ensuring that these shared natural spaces receive the funding they deserve. We are also thankful to all members of Congress from both parties who supported this legislation, and to Ohio Senator Rob Portman in particular, who has spent the last decade leading the effort to secure this much needed funding for our public lands.”

Airstream was founded by Wally Byam in his backyard in Los Angeles in the late 1920s. When production resumed after World War II, Byam opened a new facility in beautiful west-central Ohio. Today, every single one of the Airstream riveted aluminum travel trailers is manufactured by hand in Jackson Center, Ohio. The Jackson Center facility manufactures 120 RVs every week.

“Our country’s renowned national parks are one of the most favored destinations for RVers who will benefit greatly from the passage of the Great American Outdoors Act,” RVIA Vice President of Government Affairs Jay Landers said. “Secretary Bernhardt has been a leader on the issue of improving our public lands and we look forward to continuing to work with him and his team to identify projects that will make the biggest impact to improve the access, safety, and enjoyment of RVers on our public lands for generations to come.”