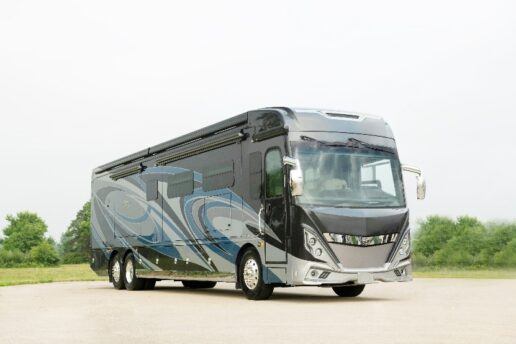 Twenty-five years after its initial launch, American Tradition is rejoining REV Group’s American Coach diesel pusher roster in 2021—American Coach’s 30th anniversary year. The new line has such “luxury appointments” as heated porcelain tiles throughout the coach, REV Group said in a press release, as well as an exterior freezer and entertainment center. 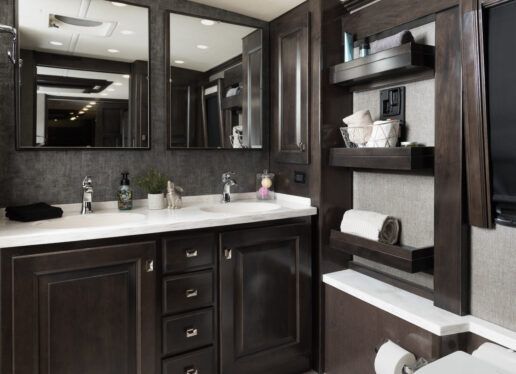 Available in three floorplans, including the 37S, the shortest luxury motor coach offered by American Coach, the American Tradition is built on American Coach’s Liberty Bridge chassis and has a Cummins L9 450 horsepower diesel engine. Other features include black stainless appliances in the kitchen, an articulating king bed in the bedroom, a 50-inch exterior TV and three roof air conditioners with heat pumps.

“This year American Coach celebrates its 30th anniversary, and the 2021 American Tradition reinforces our heritage of excellence,” said Bill Reith, Vice President and General Manager of REV Recreation Group in Decatur, Indiana. “We are delighted to launch the renewed Tradition, which offers an exceptional level of detail our customers expect and appreciate.”

The 42V has two sofas, a large kitchen and a dinette. It also has private space with a king bed, full-length wardrobes and dresser, and full master bathroom.

This model is spacious and sophisticated, with three slides, a mid-coach half bath, a dishwasher, and a stackable washer and dryer in a luxurious walk-in wardrobe.

The 37S, the shortest luxury American Coach, is filled with features including his and her sinks, a residential refrigerator, a 72” sofa with a queen mattress, and two full bay slides.