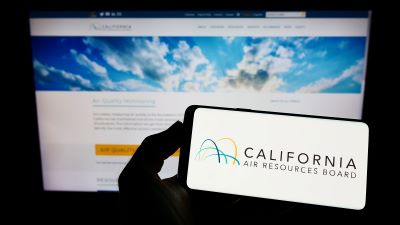 RVIA is watching CARBs. The effort is not the result of post-Thanksgiving indulgence.

The association is acting to address concerns about California Air Resources Board (CARB) regulations prohibiting new carbon-emitting car and truck sales. The regulations will affect vehicles that tow small travel trailers in just over a decade. Five years later, medium- and heavy-duty vehicles will be impacted.

Because many RV OEMs do not manufacture tow vehicles or chassis, the regulations may not seem to be an issue to the industry. However, RVIA said anything affecting RV customers and how they use their units is concerning.

CARB has established a requirement that 35% of new car and light-duty vehicle sales be zero-emission models by 2026 and 100% by 2035. According to the state’s Advanced Clean Trucks Act (ACT), zero-emission truck/chassis sales would need to be 55% of Class 2b-3 truck sales, 75% of Class 4-8 straight truck sales, and 40% of truck tractor sales. The Advanced Clean Fleets regulation currently under development will increase those percentages to 100% by 2040.

“We are working with regulators and legislators to let them know that the RV industry is not the car industry or the truck industry,” RVIA Director of State Government Affairs Michael Ochs said. “It is a tricky situation because of what RVers require of their vehicles. And RVs are used differently than other vehicles, so there isn’t a one-size-fits-all solution to lowering emissions.”

Under the U.S. Clean Air Act, California is the only state permitted to create its own emissions standards rather than follow federal requirements. Section 177 of the Clean Air Act allows other states to adopt California’s emission standards. Although only Oregon and Washington have confirmed their intention to adopt the standards, 12 other states are exploring their options.

Since California represents a large U.S. new car market, many automakers, especially those with EV models already in production, have voiced their support for CARB’s new regulations.

Among these car and truck manufacturers, offering different models and potentially different prices to consumers in one or a few states creates questions. So, too, does over-state-border purchases of non-compliant vehicles and California’s potential legal actions against dealerships that facilitate those purchases, RVIA said.

RV manufacturers, suppliers and dealers are feeling justifiably confused and uncertain about the rules, RVIA said.

Access to charging stations is of particular concern to snowbirds and other RV owners, the association said. Boondockers also have issues with the regulations. Although California currently has the country’s best infrastructure for EVs along popular routes, RVers increasingly prefer to explore roads less traveled.

Because RV manufacturers are consumers of the companies that build chassis, Ochs has worked closely with truck manufacturers, the association said. He recently organized a large manufacturer and RV dealer coalition to testify at a public hearing in California. The dealers commented about regulations affecting larger RV gas-powered generators.

RVIA’s federal and state government affairs teams, as well as the lobbyists it has engaged to monitor and advise on regulatory actions in California and at the Environmental Protection Agency, are working to ensure the regulations’ impacts are not overlooked as the complex issues around reducing carbon emissions are addressed, RVIA said.