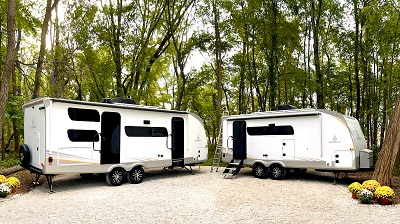 “When we set out to create the Touring Edition, not only were we listening to what customers were asking for, but we again put an emphasis on building with higher quality materials, better components, and designing a camping-correct RV, which is what our customers deserve,” said Chris Barth, Ember founder, COO and head of product development. “Our team did not shy away from one-upping the competition, challenging the status quo, or making a mark on the segment we are entering. Touring Edition once again proves what hard work, determination, and innovation can do.”

The bedroom features a walk-around residential-sized queen bed with USB and 120-volt power access and LED lighting on each side. Touring Edition has a dual-ducted, 15,000 BTU roof-mounted air conditioner and a 30,000 BTU furnace.

Options on the Touring Edition include CUB’s dual-radar Lane Change Assist (LCA) System, providing visual assistance to the tow vehicle driver in making safer lane changes. Ember is the first RV manufacturer to partner with CUB in offering LCA from the factory.

Customers can add an electric fireplace, a second ducted 15,000 BTU roof-mounted air conditioner, an outside griddle and a wireless side and rear observation camera system with monitor.

“We are proud and excited to introduce our newest addition to our product offerings with the Touring Edition,” said Ashley Bontrager, founder, CEO and president of Ember. “The team has worked extremely hard the last several months to get to today. The day that we can show our current and future dealer partners what we are capable of and where we are going next after launching our award-winning, market-disrupting Overland Series last year. My goal when starting Ember last year was to build a company that I would want to work for, that I would want to do business with, and that I would want to buy from. All the decisions I have made in guiding Ember throughout the last year have run through at least one of those three filters. I think dealers and customers alike will find that Touring Edition is just another example of the team’s focus and how Ember has set out to do something different, always striving to find ways to do and be better.”

In addition to introducing the Touring Edition, Ember is hosting current and future dealers at its Expo at its campground on its premises by invitation only. Ember will display some of its newest Overland Series models including the 191MSL, 201FBQ, 221MDB, ROK and the never-seen-before 221MSL.