Ember is teaming with dealer partner Optimum RV on its Tampa display.

The first new floorplan is the 21MRK, part of Ember’s new award-winning Touring Edition. The second is the 221MSL in Ember’s Overland Series. Both will be on display in booth No. 750.

The Overland Series 221MSL is the upgraded and enhanced tandem independent suspension version of the popular 191MSL floorplan. The 221MSL features an adaptable “locker” space in the rear of the unit with the EmberTrack E-Track Bunk/Storage System. The RV comes standard with two double bunk platforms, rated at 600-pounds each, which can be moved up and out of the way, configured as single or double bunks, turned into a desk for a mobile office space, used as storage shelves or completely removed. The built-in E-track enables aftermarket accessory use through third-party suppliers like tie-downs, hammocks, straps or other equipment. The locker area also features a large cargo door and a rear kayak/bike door. 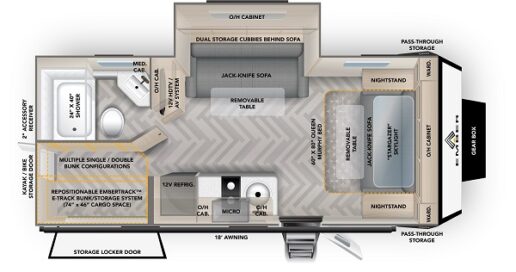 “We are excited to showcase not only these two new floorplans, but also the Touring Edition in Tampa, as it will be the first major retail show for our new line of luxury light weight travel trailers,” said Chris Barth, Ember co-founder and chief operating officer. “Customers will find that the Touring Edition is another example of how Ember has set out to do something different, always seeking to find ways to challenge the status quo.”

Ember’s industry-exclusive Flex-Suite floorplans (24MBH, 26MRB, and 28MBH) feature a Murphy bed in the primary bedroom and the ability to convert the private front bedroom space into an office, den or a separate lounging area. The room has two removable tables and a jack-knife sofa, providing space to be used differently depending on a customer’s needs.

“Touring Edition as a new-imagined product line and the truly unique 221MSL floorplan exhibit how the Ember team, stacked with years of RV industry experience, is constantly listening to what customers are asking for, putting an emphasis on building a camping-correct travel trailer with higher quality materials and better componentry,” Barth said.