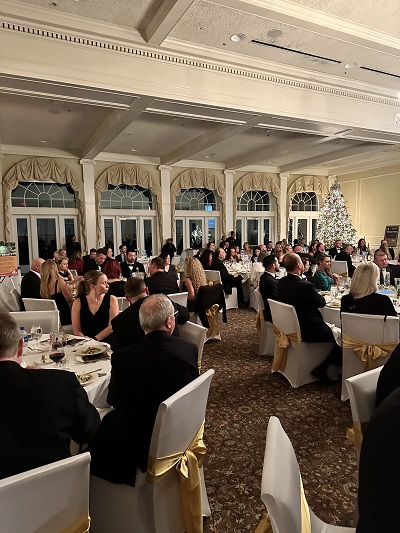 Campers Inn RV held a gala fundraiser for Care Camps for Kids on Dec. 2 at the Timuquana Country Club in Jacksonville, Florida. The event drew 150 dealers and industry leaders to enjoy a black-tie dinner, live auction, band and keynote.

A silent auction was held online. The event raised funds for Care Camps, an organization that brings hope to children with cancer through camping experiences.

“I have always wanted to be able to give back to kids. I had a very sick daughter when she was young and I know how that feels,” said Deby Hirsch, Campers Inn’s head of charitable initiatives. “I wanted to find a way to give back now that she is in remission, and she is well. I feel very fortunate. I think the dealership as a whole picked this charity because it is something that felt right for all of us.”

Keynote speaker Cody Lowry, best-selling author of “Schmooze: What They Should Teach at Harvard Business School,” buoyed the crowd with tales of perseverance and tenacity, Hirsch said.

“The whole event was absolutely beautiful,” said Erica Lanter, Care Camps head of marketing communications. “The dinner was beautiful. Everyone was dressed up.”

Paul Brunoforte, husband of Debbie Brunoforte, Campers Inn VP, Western Region, was the event’s master of ceremonies. The band Big Easy played acoustic guitar and horn during the cocktail hour and big band music for the event. The Campers Inn staff decorated the venue themselves.

The live auction was the highlight of the evening, Hirsch said.

“The auction was so much fun,” Hirsch said. “We had some crazy people in there having a great time. We had the best time.”

Hirsch’s daughter bid on a box for 18 people for a sold-out Taylor Swift concert in Nashville, Tennessee.

“She was sitting across the room from her Dad and she said, ‘Dad, do you know how much those tickets go for? Let’s put money on this.’ He goes, ‘Taylor Swift, who is that?’ She said, ‘Oh, Dad,’” Hirsch said. “He said ‘Ok’ and she started bidding and she was having the time of her life. I have never seen a more natural in my life than that girl. Every time she threw her hand up, she was so excited. There was nobody who was going to beat her. She would have broke her Dad to get those tickets then.” 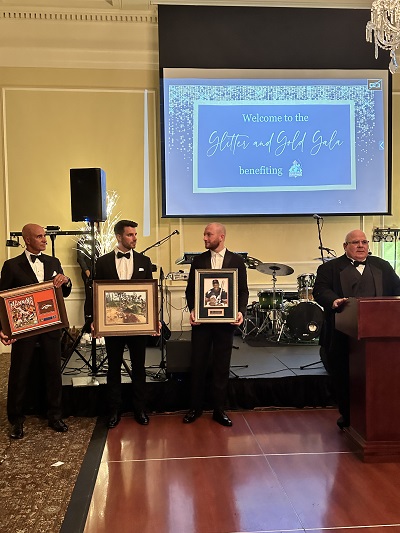 According to Hirsch, Jayco President Ken Walters “came straight out of the chute and I think he got the first two auction items right off the bat. He was really very out there.”

Other auction items included Kentucky Derby tickets, a stay at the Hirschs’ house at Lake Winnepesaukee in New Hampshire, Super Bowl tickets and a package to stay at a house in Sonoma, California.

That evening, Care Camps chose Campers Inn to receive the We Care Award.

“Award winners are a key partner with us,” Lanter said. “But they go above and beyond just writing a check and really help us to propel our efforts forward and Campers Inn has done that in such an impactful way this year. They were just, hands down our choice for the We Care Award.”

This event continued the Care Camps initiative started a little over a year ago. An employee match program enabled employees to choose a payroll deduction that Campers Inn matches dollar for dollar every quarter.

“In the name itself, you can tell because they call them Care Camps. It’s what we do. We are very driven by family and being together and having that family atmosphere,” Hirsch said. “We heard about the charity and it is pretty interesting because they are so into the children and they are so into kids and camping and families. It is a perfect match for us.”

The finalized total gala fundraiser amount was not available at press time. However, the estimated amount “blew us away,” Lanter said.

“It was more than I ever thought it would be,” Hirsch said. “We are going to send a lot of little kids to camp. I am so happy.”