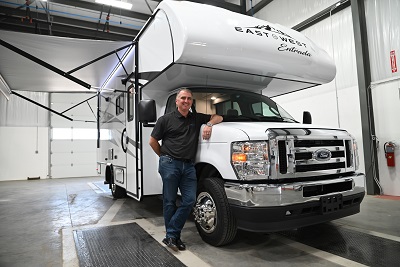 As the newest addition to the brand’s lineup, East to West stated Entrada’s meaning – “a journey into unexplored territory” – suited the brand’s venture into the motorized segment. The manufacturer highlighted the unit’s standardized build, which includes five floorplans ranging from 24-33 feet and one “Granite Peak” interior.

The brand’s Type C national sales manager, Tony Young, said a few prototypes were built and shipped to a select dealer at the end of May. The company is operating in a temporary production space, with a new 100,000-square-foot facility slated for completion at 2021’s end.

“Overall, we are ecstatic,” Young said. “The product has been viewed by dealers at this point with an overwhelming positive response.

“We believe strongly that we are building a motorhome with the best construction techniques and components to help minimize warranty issues,” Young said. “On top of that, [we are] making it the best-looking Class C out there. I am confident that retail customers will fall in love with Entrada from the East Coast to the West Coast.”

The company’s future production space will be dedicated to the new unit, Young said. More than 100 employees are expected to be hired to support the facility’s sales, service and production, he said.

“While the floorplan offering is limited, the company has targeted the top-selling and most functional floorplans for a variety of customers,” East to West stated.

The Entrada will be built on Ford E 350 and E450 chassis. Standard Entrada features will include a one-piece molded fiberglass front cap, laminated sidewalls with Azdel Composite backing, backup and side view cameras and hardwood cabinetry. In addition, technical elements will include the Winegard omnidirectional antenna, solar prep, LP quick connect and electric awning with LED lights.

Young said East to West planned to enter the Type C market in 2017. The brand’s Entrada has been in the works since the beginning of this year.

Those interested can learn more about the Entrada here.