When Alyssa Cox arrived at Forest River to serve its Rockwood, Flagstaff and Palomino brands, she was the divisions’ first marketing professional in 45 years.

What began as a one-woman band rapidly grew to a team of five within months this past year, including a videographer and first-ever interior designer who share views of “pushing limitations” in modernity and practicality, Cox, the team’s marketing director, said.

The brands experienced a “drastic” shift in demographics three months ago, she added, when social media metrics showed an entire age bracket drop in the brands’ followers.

“The growth of social media has correlated to sales,” Cox said. “When a video goes viral, our floorplan views increase. We justify that with the use of social media.”

Cox said the demographic shift was bolstered when “the world went dark” in COVID-19’s wake.

“Last March, I noticed a jolt in social media,” she said. “Followers were coming out of the woodwork. People were sitting at home on their phones, on Facebook. It was extremely good for us. We jumped over every hurdle and stayed vibrant on social media to keep the brand visible to everyone.”

When Cox took over the marketing team in summer 2019, she saw the brands’ Facebook following steadily increase from around 5,000 to 42,000. One of the brands’ dealers hit 1 million YouTube views in that time period, she added.

Cox manages marketing materials, media engagement and projects such as the company’s #WeRV social media hashtag, which she said was created to “humanize the brand” for a new wave of customers looking at companies differently than their older counterparts.

“Newer, younger buyers want to buy into a lifestyle, not just a product,” Cox said. “We are able to represent that through social media and the sense of community we have curated around our ‘WeRV’ hashtag. New owners and dealers are using the hashtag now every time they post our products. They get excited about it and the lifestyle it represents.”

She noted some Rockwood dealers received feedback from prospective buyers relating their potential purchases to what they saw on social media. Other dealers heard new RV owners associate their purchases with feeling “cared for” by the dealership and manufacturer, she said.

“The rebranding and #WeRV is to paint a picture showing we are not just manufacturers here to pop trailers out the door,” Cox said. “Half of the sales team owns RVs and camps – ‘We RV,’ too. It is a lifestyle in our office and we want to promote that.”

The approach is new to the divisions, she said, one that focuses on connecting with customers beyond the sale.

“The biggest thing with social media marketing is with people spending time online, looking at [purchases] with a price point of $1,000 to $100,000,” Cox said. “Us as manufacturers have to have everything transparent for buyers, before they get to the dealer level.”

She said an essential marketing team goal is to produce as much content as possible, which helps dealers sell product quickly. The goal doubles as one of the team’s biggest challenges.

“It is keeping up with the demand for content,” Cox said. “Dealers are seeing the importance of social media when they were closed for months on end, by reaching customers through content. We provide for that, and that is where the push to continue hiring came from.”

Cox was wearing all the marketing hats in the team’s early establishment, but said the company realized quickly a need for assistance in specific areas.

“We want do as much in-house [marketing] as possible,” Cox said. “The RV industry has always functioned by outsourcing for graphic design, photography and videography. We want to bring that in-house and tailor to our own product and timing.” 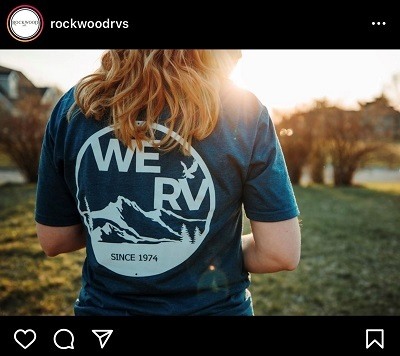 The team’s Videographer Pashma Morseau was hired in May 2020, followed by a marketing assistant within the Palomino brands, Ashlynne Gingerich, and Graphic Designer Zach Ide, who was hired this year. The interior designer, Tiana Walter, joined the team last November. Prior to that, the divisions’ operations manager and sales staff were responsible for designing RV interiors.

“Our interior designer is young, vibrant and trying to bring in the modern environment,” Cox said of Walter. “She is a female trying to push the boundaries and ceilings. Nothing has ever really changed in the RV industry [until now]. There are a lot of new and exciting things happening on top of what is going on in the industry.”

The team, which includes three women, continues to gear up for a new era and accompanying roles in RVing.

“We are carrying on with the ‘We RV’ mantra and pushing that socially to dealers,” Cox said. “There is a big learning curve and a lot of pressure to keep putting out content. But we have the biggest opportunity with the rebrand. We stand alone in Millersburg, Indiana, and we do things the right way.”

Forest River makes its Rockwood and Flagstaff brands – which offer 200 floorplans of similar products – based in Millersburg. The company’s Palomino business is based in Colon, Michigan, with its Columbus brand producing fifth wheels in Middlebury, Indiana.