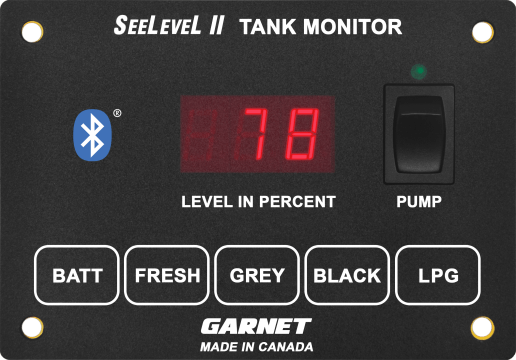 The Garnet SEELEVEL II Model 709-BTP3 will be available June 1 through Garnet’s RV parts distributor network. Pete Pennington, sales, service and marketing manager at Garnet, said the company updated its system with the added feature of being able to check tank levels from a smartphone app, as well as on a small display screen in the RV.

“It’s ideal for retrofits, where the tank system or wiring is limited,” Pennington said. “They can actually install the Bluetooth monitor anywhere on the RV and be able to view the tank levels.”

Garnet is a longtime producer of holding tank readers and other RV electronics systems, and Pennington said the new Bluetooth reader will be as reliable as the supplier’s traditional products. The system is based on sensors and Bluetooth tech the company uses in many of its other products.

“The senders that go on the tank are our standard basic sensors, and that’s where all the technology is really,” Pennington said. “That’s sent to a display, and as a secondary option you can download an app and view the levels from your phone.”

In addition to being able to instantly view holding tank levels on heir phones, users will also benefit from new features including a warning light and more precise measurement display.

Pennington said the system runs on standard sensors placed on the holding tank that are sent to a display monitor via the Bluetooth network. The new display will give RVers more accurate readings, showing a capacity percentage as opposed to the typical “1/2” or “1/3” full readings.

“The Bluetooth system also has a feature now where it’s a single alarm output wire which you can wire to a little LED light if your freshwater tank gets too low or greywater tank too full,” Pennington said.

Pennington said he is optimistic about customers’ reaction to the new tank reader, and that it will likely be popular as a retrofit or DIY product. He also said Garnet has seen the retrofit side of its business pick up during recent weeks.

“A lot of end users took this time when they couldn’t travel and parks were closed or at least restricted, and seemed to take the time to buy our systems and install them on their own,” Pennington said.

Garnet will work with OEMs to have the system installed in RVs before market, as well as offer the product directly to customers through dealers and a distribution network.

“Typically, what we do is we install it, or our customer would install the system instead of the old display,” Pennington said. “We do work with several OEMs, like Airstream for instance uses us exclusively. Plus, we’ve actually been picked up by manufacturers of boat houses or enclosed trailers with living quarters.”

Pennington said the company hopes the integration of Bluetooth tech into its holding tank system makes taking an RV out for a vacation more hassle-free.

“We want to make camping less of a hassle for people, and I know from firsthand experience the existing tank monitoring system doesn’t work perfectly all the time,” he said. “Our product really does solve a pain point for all RVers, whether it’s you’re first time buying or you’re just looking for a change.”