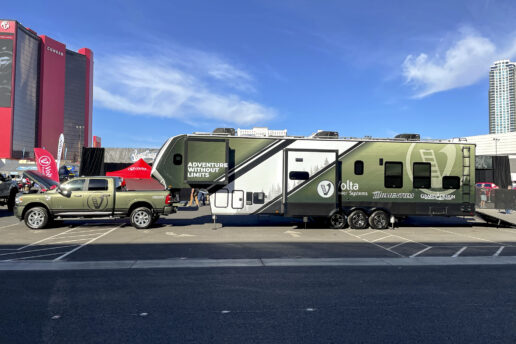 Grand Design RV brought a slew of RVs to the Tampa RV SuperShow in January to display for consumers and industry members.

The display included floorplans from the Reflection, Transcend, Momentum and Solitude lines, an aspect the Grand Design team said was appreciated by attendees. Visitors said having multiple floorplans made it easier to compare models and brands.

Peter Kinden, general manager of the Reflection, Imagine and Transcend brands, said the manufacturer received good traffic and excitement for the brands and floorplans on display at Tampa.

“It is looking to be a good year for Grand Design,” Kinden said.

Executives said consumers were most excited for Transcend’s 245RL, 200MK, 265BH and 251BH floorplans. Features that stood out included the solar package, which includes a 165-watt solar panel, a 25-amp charge controller and the newly added battery monitor, an aspect received well by SuperShow attendees. The battery package will run a 12-volt fridge.

Many consumers asked Reflection brand ambassadors about the length, weight and lead times in obtaining the RVs. The most popular Reflection models were the 226RK, 260RV, 337RLS and 341RDS, officials said.

Imagine RVers were most interested in the XLS’s 17MKE, 22MLE and 23LED models, and the standard Imagine’s 2670MK, 2800BH and 3100RD. Concern remained about lead time for obtaining an RV, the Grand Design team reported.

Solitude Product Manager Tommy Hall said his brand displayed 12 units at the Tampa SuperShow, including two new models: the 280RK and 3330RE. The most popular units, he said, were the 390RK, 390GK, 280RK and 346FLS.

“People are really liking shorter, luxury fifth wheel models,” Hall said. “People are asking for more floorplans in that kind of a lineup, but it has been a steady mix of fifth wheel and travel trailer buyers depending on the day.”