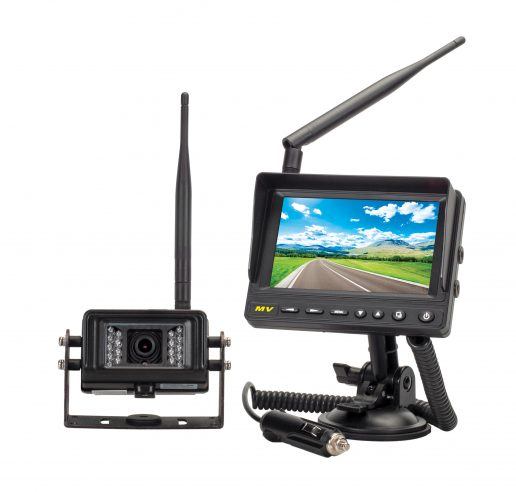 Magnadyne’s newest backup camera system was designed to be an easy aftermarket addition to most RV models.

The RV electronics supplier is marketing the MV-BC1 Backup Camera to dealers nationwide as a go-to product for end users looking for a D.I.Y. backup camera system. Magnadyne Vice President Mark Hockett said the simple, lightweight wireless camera is easily tucked away on the back of an RV.

“We focused on ease of installation,” Hockett said. “It’s conveniently designed, so that even if your vehicle wasn’t pre-built to hold a camera system, you could easily put this system in in 30 minutes or less.”

On the back of a travel trailer or motorhome, Hockett said, the new camera won’t stick out and should look just like a running light.

The camera’s display screen inside the vehicle runs off of a typical 12-volt port and can support two camera feeds in certain applications. The wireless stream is designed to run independently as its own system.

Jared Doyle, West Coast sales representative, said Magnadyne sells lots of back up cameras to large trucking companies, and it only made sense to design one for use in RVs.

“The camera system itself is based a lot off of the wired camera we have, which is a well-known product in the heavy truck industry,” Doyle said. “The part that was new to us was designing it to make it fit in an RV type system, which is why we changed the antenna.”

Doyle said the company’s engineers realized many consumers would purchase the new camera as an aftermarket product. Throughout the design process, he said the system shifted to become more adjustable as an addition to current RV models.

The new product, dubbed the MV-BC1 Backup Camera, comes pre mounted to the camera bracket for easy attachment to the back of an RV chassis. The monitor comes with a suction cup mount that will attach to a vehicle’s front window.

“Our kit also includes adapters that allow it to fit into wiring that’s already been installed,” Hockett said.

Betzer said on the OEM side, manufacturers can save on costs by simply prewiring their vehicles to support this kind of system, instead of fully installing the camera on the RV.