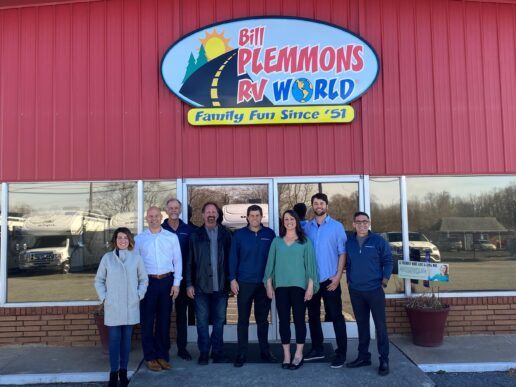 Steve Plemmons spent five decades working at the dealership his father founded, including nearly 30 years as co-owner with his brother. Come February, he will step aside and let the next generation lead the way.

Steve Plemmons, son of RV World founder Bill Plemmons, said RV Retailer, LLC (RVR) reached out to inquire about an acquisition more than two years ago, but he said it was not until recently that he felt the timing was right.

“RV Retailer made it a smooth and simple transaction by understanding my needs, not just for the transaction but the future of the store,” Steve Plemmons said. “It was important for me to know they would be working with the team my family built from over 70 years doing business in the North Carolina markets.”

Steve Plemmons said his children, Shawna and Sterling, will continue leading the stores as he transitions from president to an advisor role. They will become the third generation to lead Bill Plemmons RV World, which is the second-largest new volume dealer group in North Carolina.

“I look forward to watching them continue to grow with the RV Retailer team,” Plemmons said. “I know our store associates are excited with the new growth opportunities ahead.”

The deal is expected to close in February.

RVR’s acquisition is among a string of deals which has led the company to more than double its dealers in the past year. RVR will own 54 dealerships in 15 states once the deal closes.

“I look forward to working with the Plemmons family,” Strollo said. “Plemmons has strong service and parts operations, and their approach aligns with our focus on providing great customer service.”