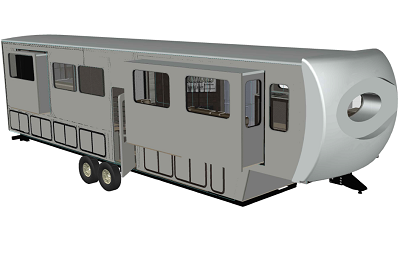 Is soon-to-debut Palomino River Ranch the biggest innovation in fifth wheels since the slide-out? It is too early to tell, but the patent-pending, single-level “ranch-style” fifth wheel is almost guaranteed to make waves when it hits dealers’ lots this fall.

Dechant said, “We have developed the first-ever RV that gives you the storage capacity and interior ceiling height of a Class A motorhome, the towability of a fifth wheel and the single-level-living floorplan of a travel trailer.”

The River Ranch is the brainchild of Columbus Lead Engineer Ron Brown. Noticing the trend toward elevated rear living areas in fifth wheels to allow more pass-through storage capacity, Brown wondered: What if the entire living area were elevated? 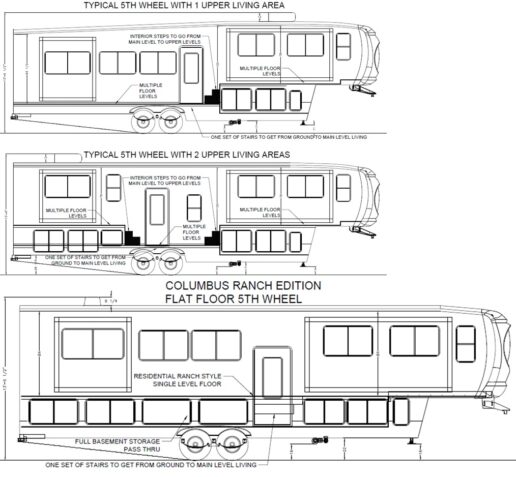 The team at Columbus figured out how to make that idea work without sacrificing too much overhead space in the interior. The “aha moment,” Dechant said, was taking the two AC units off the roof and moving them to the basement. This allowed River Ranch to fill up the 13.5-foot height limit with living space rather than ACs.

As a result, the River Ranch has 480 cubic feet of pass-through storage, which Dechant said is more than has ever been done on a towable by a wide margin. He noted that very few Type A motorhomes even reach 300 cubic feet of belly storage.

Dechant said the 84-inch overhead ceiling height puts River Ranch on par with Type A motorhomes and is the most overhead room of any single-level towable. Another unique aspect is that the entry door opens onto a stepwell, also like a Type A motorhome, to reach the main level.

The Coleman-Mach AC system is a model comparable to residential units. It has mostly been used before on mobile offices rather than RVs. It has a robust filtration system like those used on homes, implementing a 5-inch x 16-inch x 22-inch air filter, which cleans the intake air for both the AC and Suburban furnace. The HVAC system uses the same ductwork for the AC and furnace.

To ensure the cleanest air, River Ranch comes with the Covid Clean Care forced option, which includes the new No Dirty Air system, which kills airborne pathogens. The unit also comes with the No Dirty Water system from the same company.

The first River Ranch units are 42 feet long, 13,500 pounds dry weight (with options), 16,500 GVWR, and close to 430 square feet of interior living space. MSRP is not yet finalized but is anticipated to be comparable to the industry’s current best-selling fifth wheel brands.

The first River Ranches will debut in October. The public unveiling will be at the Preakness Stakes horse race on Oct. 3. The first two floorplans will be a midbunk and rear-living couple’s coach.

The first prototype is in the middle of rigorous testing at Navistar Proving Grounds, going over harsh terrain both loaded and unloaded. Results so far have been very positive, Dechant said.

“It’s such a new concept,” he said, “we wanted to get as much test data as possible to prove it works.”

The single-level fifth wheel concept will be proprietary to the Palomino family, Dechant said. The company’s legal team have started the patent process and are seeking to protect the intellectual property from a variety of angles.

The few dealers Palomino has shown the idea—under strict non-disclosure agreements—have been almost giddy in response.

“It’s so fun pitching it,” Dechant said, “because you start talking and see the dealer’s face instantly get it and light up and go, ‘Oh my, we have something incredibly special here.’ That energy has really fueled us these last couple of months as we’ve been getting River Ranch to the finish line.

“Some of our seasoned dealers have told us their Class A motorhome buyers are definitely going to want to see this,” he said. “Their fifth wheel buyers are going to want to see it because storage is absolutely imperative to extended-stay consumers, as well as people using the unit as a mobile office or for construction workers who travel in them.”