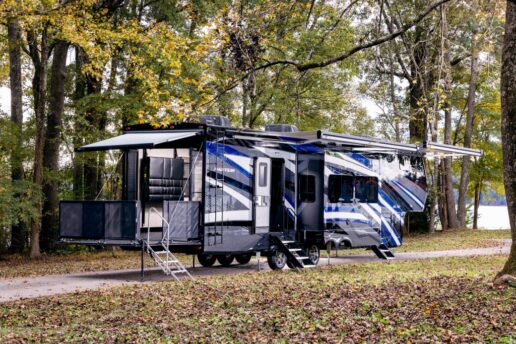 The VanLeigh division of Tiffin is adding a third vehicle to its lineup, this time a toy hauler.

According to Chase Davis, national sales manager for VanLeigh RV, the directive from Leigh Tiffin, president of Tiffin Motorhomes, was to “build a Beacon and put a garage in the back of it.” He said the design stemmed from dealers and end-user feedback that found there were few niches left that VanLeigh would be able to fill.

“They were saying that we have units to fill this segment, that price point — this is what we do not have,” Davis said. “We are taking a successful brand, the Beacon fifth wheel, and we are listening to the dealers, listening to the end consumers, and all of those who have said I love this fifth wheel, I love the interior…but they either have motorcycles to take with them, or an ATV, or three miniature horse-sized dogs that need space outside the main living area, or whatever it is. People were asking for a high-end, outside and in, toy hauler.”

Other design elements included were a dual entry, one in the main living area and the other in the garage, to allow for full separation if the users wanted, and providing a second exit for safety. A ramp patio was included.

“It just makes sense,” Davis said in terms of the space use.

The first units have been delivered to — and sold from — dealers’ lots since the vehicle first was unveiled to the public at the Hershey Show in September.

With a 13-foot garage, three full body paint options and enough room to sleep eight, the triple-axle Ambition weighs in at 21,000 pounds. It is also not cheap, Davis said, saying the Ambition is first and foremost a luxury fifth wheel.

“You have got to have those three axles — it is a 44-foot fifth wheel, in essence — so we thought of safety, we thought of peace of mind for the end user,” Davis said. “We did not do anything in that area that was not expected or that is not the norm in fifth wheel toy haulers.”

Other features of the Ambition are:

The Ambition will be at the Florida SuperShow, scheduled for Jan. 19-23 in Tampa.