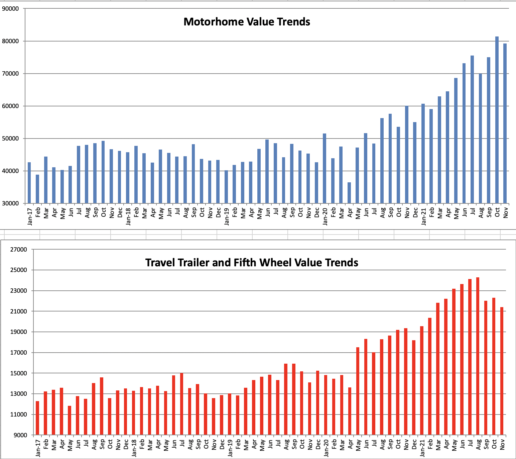 For the first time in several months, the wholesale RV market segments behaved “normally,” according to Black Book experts.

“Typically, in the beginning of winter we will see values start to decline on a lot of the seasonal use vehicles,” Lawrence said. “This time, looking at November data, motorhomes dropped a little, and travel trailers dropped too, which is consistent with what we expect to see.”

“The RV market was super-hot in 2020 during the middle of Covid,” the analyst said. “So, we did see a motorhome price drop in October and December, but there was a little spike in November. In travel trailers, we saw a drop in December.”

Lawrence said consumers typically are not in a rush to buy something they will not be able to use for several months, especially a large price-tag item like an RV.

“These markets are very seasonal, cyclical, and so basically, looking at this past month, they behaved in a way that is historically consistent,” Lawrence said. “That being said, the markets might behave this way again in December, but who knows.”

Auction volume was up during November: motorhomes gained 2.1%, while towables increased 7.7%.

Lawrence noted that the chip shortage has led to consumers that would typically purchase a new vehicle having to instead purchase a used vehicle.

“That carries over into the RV world as well,” he said. “Many used buyers are frustrated new buyers.”