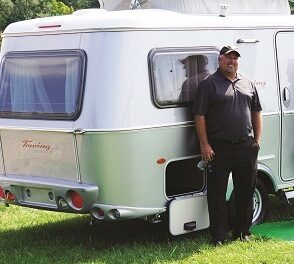 Snell, a Eugene, Oregon, resident, was 54. He worked in the RV industry more than 30 years, including stints at Monaco Coach, Roadtrek and Thor Industries.

“He was like a son to me and my wife, Judy. We just loved him,” said uncle Kay Toolson, who visited Snell every day for the last two weeks. “He was a great human being. I have probably had 500 text messages and the same number of phone calls.”

A private graveside service will be held for family Sunday, Toolson said. A public celebration of life is planned for the spring.

Snell was known by many people in the industry as being informative, upbeat and always donning a friendly smile. “A fun guy to be around,” his friends say, who never uttered a bad word about other people.

Bob Parish was a finance supplier in the 1990s when he met Snell, who was a salesman at Monaco Coach. The pair became good friends over the years, Parish said, because Snell was personable, knowledgeable and entertaining. Parish said he will remember Snell most for being a proud father to his two sons, Brandon and Michael Jr.

“I don’t know how he did it. On weekends he was doing best as anyone could in this industry to get back home and be with his boys,” Parish said. “Every holiday season we get a Christmas card with him and his boys. We had multiple years of cards that we put up on our mantle.”

Parish said what he liked about Snell is he never lost his cool. He said he imagined Snell was as smooth with executives as he was with dealers and suppliers. Snell had an even-keeled personality that played well in any environment.

“I worked with him from Monaco to Navistar to Rev to Roadtrek and Thor. I saw him go through a lot of change. I saw him redesign himself going from 45 feet to 20 feet. That’s no easy task when you rep a product that’s Class A diesel with lots of room and then you go to a 20-foot coach,” Parish said, adding that Snell helped put Thor Motor Coach squarely into the Type-B market. “That’s a huge change for anyone and he did it gracefully. It is a rare thing.”

Thor Industries President and CEO Bob Martin said Snell was texting him last weekend about the Purdue University versus Oregon State University football game. While the pair had been industry colleagues and friends for decades, football was a shared passion.

“This is a tough one…unexpected. He was a good guy.”

“He always wanted to know more about the person he was dealing with,” Carroll said. “There was a lot of personal time that he would spend getting to know people.”

Carroll said Snell was good at breaking bread with people at dealerships.

“Everyone loved Mike,” he said. “Our phones have been flooded by all of these owners and CEOs at dealerships from across the country…what a loss to the industry. He was such a great guy and, gosh, we will miss him.”

April Klein, who worked with Snell at Monaco Coach, said he was never afraid to be honest with people.

“Everyone truly cared about him and asked about him,” Klein said. “He went to Oregon State University and was an avid Beaver fan. He started doing internships at Monaco in college. He was this little, spindly blonde kid we used to call Sparky.”

Martin met Snell during his time at Monaco Coach, where he was revered as a motorhome specialist and eventually became president of the company. Recently, Snell became a Type B van specialist at Thor. Martin said it is a tough week for many people in the industry.

“He had a passion for the RV lifestyle, the art of sales and being a partner to the dealers,” Martin said. “I think people will look back at Mike fondly. You can kind of just see his smile. It’s truly sad.”

“I recall his first days on the job. He was truly humored, if not fascinated by, the fact that so many people actually found ‘the little vans,’ as he called them, comfortable to travel in,” McDougall said. “This, based on Mike having spent so many years previously serving the much larger styled A-Class motorhome segment. It did not take long for Mike to adjust to the compact vans, and he went on to be a great leader, loyal to his team and a good friend of many within the company.”

Snell is survived by his sons, brother Jeffrey and parents Lynda and Peter.

“He was a great guy. I just figure God needed him worse than we did,” Toolson said. “That is where he is, I am certain. He is probably selling motorhomes in heaven.”