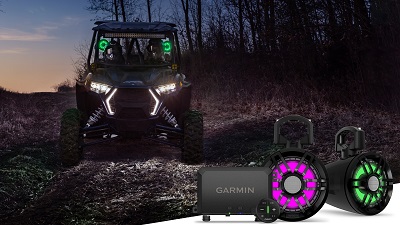 This stereo system brings music and lights to any ride, Garmin said.

Consumers can customize and control their audio with an included wireless remote or by pairing the system with the Tread app or any Tread navigator.

“The Tread Audio System gives recreational off-roaders a flexible, high-performance all-in-one audio system that can easily fit any side-by-side or off-road vehicle on the market,” said Dan Bartel, Garmin global consumer sales vice president. “Whether you’re exploring the wilderness or enjoying a fun, casual weekend trip to the lake, you’ll be able to play back your favorite beats with a set of versatile LED speakers that are easy to set up and customize to fit your mood.”

The Tread Audio System has a four-channel amplifier producing 100-watt root mean square (RMS) per channel. Consumers can synch the LED speaker lights to display call sign colors on the lights during an adventurous ATV or side-by-side group ride.

For users without a Tread navigator, the included wireless remote can control all sound as well as sync a smartphone to the Tread app.

The standalone Tread Audio Box with LED controller SRP is $599.99.