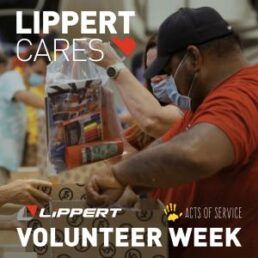 Team building, bonding and giving back to the community were Lippert’s focuses during the company’s volunteer week, April 19-23.

“We were so excited to partner with National Volunteer Week this year, and we are so proud of all the team members across the nation and internationally who got involved,” said Michilah Grimes, Lippert’s director of corporate and community impact.

Other Lippert divisions, including Curt, Taylor Made and Europe-based sectors, also participated in the weeklong initiative to “showcase Lippert’s widespread commitment to making a difference.”

Lippert’s company-wide volunteer initiative launched in 2017 and continues toward a stated yearly goal of 100,000 service hours, Grimes said. The 2021 event took place at Elkhart County Fairgrounds. Grimes noted community partners who helped with the initiative, including Welch Packaging, Siteworx, IRBN and others.

The 2021 volunteer week is the first of “many” Lippert volunteer activities planned this year.

“Lippert has always had its eyes on the prize for being a business that is a force for good, and volunteer work is one of its key components in bringing that vision to fruition,” the company stated.

“Lippert leaders, team members, and partners are looking forward to a year of service that continues to set the foundation for bringing communities together and serving for a greater purpose,” Lippert stated.