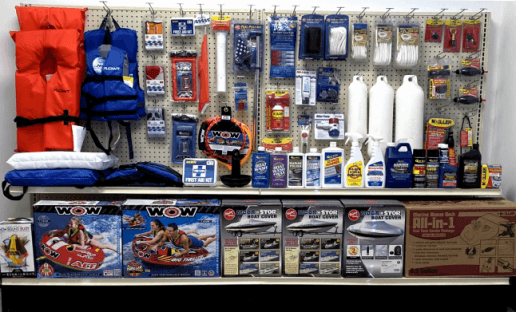 Parts distributor NTP-Stag is expanding its distribution network into the marine industry.

The company is in the initial stages of ramping up its efforts to compete in the marine aftermarket, working with current suppliers and reaching out to new partners. The company will leverage its existing supplier and dealer relationships and its expansive hub and spoke distribution network to bring in new marine products and earn the business of new marine customers.

Jon White, director of Category Management for RV and Towing, said the expansion is driven by similarities between RV and marine coupled with NTP-Stag’s established nationwide distribution network. He said the fast delivery and high fill rate distribution model developed for the automotive and RV aftermarkets seem like a natural fit for marine.

“Our logistics infrastructure is scalable,” White said. “We have 2.9 million square feet of warehouse space and can accommodate the addition of vital marine parts and accessories. We have more than 500 company owned and operated trucks on the road delivering daily to our automotive and RV customers. Our delivery routes are well established, and new marine customers can be easily added to those routes. If a single route gets too full and service levels are stressed, like a stock, we split the route in half and add a new truck.”

The company’s hub and spoke distribution system delivers most businesses’ orders next business day in the United States. White said he is encouraged by the positive responses he’s received from marine suppliers and dealers so far, and is excited to see the response when the expansion goes full throttle.

“Some of our current automotive and RV supplier partners make marine applications which we never stocked. We will now add some of those SKUs into our portfolio,” White said. “We are also

reaching out and adding new suppliers whose primary focus is marine based products. We are aggressively researching and establishing relationships with all the companies that make the most sense for marine.”

White cited Thetford, Xylem and Star-Brite as examples of suppliers who will have additional line items stocked. Taylor Made, Orion and Moeller are examples of new marine companies NTP-Stag will begin stocking anew. Relationships with boat, jet ski and watercraft engine manufacturers may become a natural expansion after the aftermarket accessories segment is firmly in place.

White said supplier companies interested in being a part of NTP-Stag’s new marine distribution network should contact Category Manager Ron Weatrowski, who is handling marine related products. Weatrowski will continue to report directly to White. Weatrowski can be reached at [email protected]

White said NTP-Stag is drawing from its experience entering the RV market years ago as it now expands its distribution network into marine.

“We have a group of folks who are dedicated to new accounts and new account development,” White said. “And we have existing salespeople who are already working with RV dealers who service both RV and marine. From a brand new marine customer to the large dealership already getting daily deliveries, we have salespeople, inside and out, dedicated to developing the relationships at every stage.”

White said he sees incremental sales opportunities for NTP-Stag’s current RV dealers, who can quickly begin offering basic crossover marine products. He said many retail customers visit RV dealerships for last-minute outdoor recreation essentials before they head out to camp. In many cases, he said, those customers are camping near bodies of water and may also have a boat or jet ski.

Retail stores who tweak their stores and prove a one-stop shop for everything needed for an outdoor experience increase their value proposition to outdoor enthusiasts, he said.

White said the company designates space each year for a model store at at NTP-Stag’s “The Expo” trade show in January. Two years ago, he said they introduced a concept called Raise The Water Level (RTWL) to promote new products.

At its core, White said, RTWL is simply moving non-retail friendly products behind the counter and putting new retail-friendly items on the showroom floor. The products moved behind the counter are typically items customers come to the counter for assistance, so those sales will not be lost. The new products on the showroom floor present incremental sales opportunities. White said the first year introduced pet suppliers, housewares and 3M products. Year two brought on outdoor games and marine.

White said NTP-Stag is searching for ways to grow, and highlighting products consumers could potentially buy at RV dealerships.

He said by capitalizing on the trends of outdoor recreation retail, the industry can access a new demographic of potential customers in the RV world. He said the same can be true for marine consumers.

“The RV buyer has changed significantly in the last 10 years. More and more it is about enabling people to do the activities they love. They love the outdoors. They love camping. They love being in and around the water,” White said. “The core products needed for a functional RV are well covered at most dealerships. Showcasing the products the customers need to enjoy RVing or the activities they love is an opportunity to grow the pie. Being a great distributor is all about making your customers successful. We believe the crossover opportunities are significant. Many RV dealerships already know this, but not all. For any retail store that wants to diversify, wants to expand, wants to grow, we want to be ahead of the curve and be the resource they need even before they know they need it.”

White said the marine expansion is a major project that takes tremendous amounts of research, resources and planning to pull off properly. He said the company will leverage a number of important lessons learned when it expanded from primarily being an automotive parts distributor years ago.

“We are at the beginning of this and while things are coming together quickly, make no mistake, we are proceeding carefully. We will make smart decisions on what products and suppliers we carry,” White said. “We want to use precision in signing up new dealerships to do it how it should be done.

“We’ve learned from the past there are always better and smarter ways to do things. We’ll use that experience. We’ll do our best to be smart about every aspect of this expansion. We’re committed to understanding the needs of marine dealers and doing everything we can to try to learn and earn their business,” White said.

When asked if marine products will be a big part of next year’s The Expo, White said, “Expo is a long way off and we have a lot to do before next January. I guess the best answer I can give is stay tuned.”