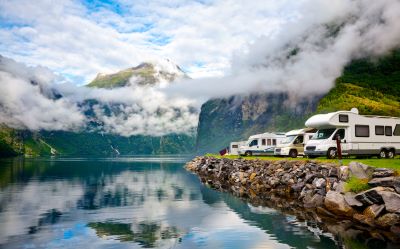 Of all campers surveyed, 58% say they plan to camp over the Labor/Labour Day holiday. The report found 30% saying they only plan to camp for the long weekend.

An total of 42% of campers indicate they will extend their holiday. Of this group, 22% expect to camp the entire week before or after Labor/Labour Day, while a similar number (21%) say they will likely add a few extra days to their trip.

Labor Day is looking to outpace Memorial Day, which is often seen as the most popular camping holiday

“Labor Day is looking to outpace Memorial Day, which is often seen as the most popular camping holiday,” said Whitney Scott, chief marketing officer of Kampgrounds of America. “Between brightening economic conditions and the continued growth of late summer and fall camping, it is apparent that camping isn’t just confined to a season.”

The August Monthly Research Report also shows the effect of shifting external conditions on camping. A third of campers said they had replaced other vacation plans with camping due to inflation. Difficulties with air travel have reflected positively on camping, with 31% of campers taking more or longer camping trips because of flight challenges. Similarly, 28% say they plan to book more camping trips in response to negative non-camping travel experiences.

Looking forward to the fall season, campers reported they plan to camp the same amount (30%) or more (25%) than autumns of the past. Of those surveyed, 22% indicated they are going on all or most of their camping trips in the upcoming season. Only 8% said they would not camp at all in the fall.

“We have always found fall is one of the best times to camp, and campers certainly agree,” Scott said. “Across our business, advanced deposits are up 2.1%, with many of those reservations falling in September. Fall camping is not a secret anymore.”