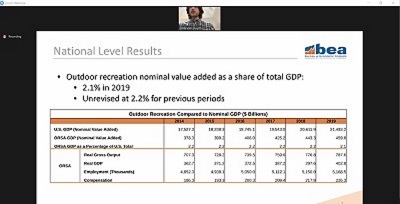 Outdoor recreation generated $788 billion in gross output in 2019, according to the latest data released by the Bureau of Economic Analysis (BEA).

In its new report on the outdoor economy, BEA found that outdoor recreation generated 2.1 percent of U.S. GDP in 2019, down slightly from 2.2 percent in 2018. The gross output rose 1.3 percent year-over-year – making outdoor recreation larger than the mining and agriculture industries. The outdoor industry supported 5.2 million jobs.

RVing was the second-largest sector among the outdoor recreation industry reported in 2019, totaling $18.6 billion. Boating/fishing was the top sector at $23.6 billion.

“Now more than ever these BEA numbers show how important outdoor recreation is to the overall national economy,” RVDA President Phil Ingrassia said. “Through the Great American Outdoors Act, the U.S. now has the direction and funding to make the needed investment in our public land infrastructure to help modernize campgrounds, improve roads and keep the industry thriving.”

“BEA’s new numbers show what we have always known in the RV industry, that outdoor recreation is a driving force in our economy,” added RVIA Vice President of Government Affairs Jay Landers. “It is because of the work of those in the RV industry who advocated for the passage of the REC Act back in 2016 that we now have these government numbers to point to as we continue to advocate for outdoor recreation policy priorities such as the recently enacted Great American Outdoors Act.”

Industry representatives expect data from 2020 to be even greater.

“For the last 15 years we’ve been tracking participation data, and outdoor participation has hovered around 48 (percent) to 50 percent of American population,” Outdoor Industry Association Executive Director Lise Aangeenbrug said on a press call announcing the data. “We have early indicators from polling that up to 69 percent of people are getting outside now.”

Aangeenbrug said the industry did more than generate income, though.

“It’s really important, not just for the economic contributions being made,” she said. “We know people’s health and wellness is really tied to their ability to get outside. People are yearning for that social connection and that ability to spend time outdoors. The 2019 data is incredibly encouraging, and we think 2020 is going to be even better data.”

Among the RV sector, Indiana generated the largest economic share at 19 percent. Texas was next at 9 percent, followed by California (8 percent), Florida (6 percent) and Ohio (3 percent).

The top states where outdoor recreation accounts for the largest percentage of each states’ total GDP are Florida, Hawaii, Maine, Montana, Vermont and Wyoming.

The fastest-growing sector from 2018 to 2019 was hunting/shooting/trapping, which grew 9.8 percent. Motorcycling/ATVing was the third-fastest growing sector at 3.9 percent.

Outdoor Recreation Roundtable Executive Director Jessica Turner said the pandemic did have an effect with regard to shutdowns on the industry, but also spurred activity such as the data Aangeenbrug cited on outdoor participation.

“It showed up in sales data, license records for hunting and fishing, RV records and more,” Turner said. “With support from Congress and the administration, we can get back to what we do best.”