The RV Industry Association (RVIA) compiles and tracks how many new RV units each RV manufacturer makes and ships to RV dealers on a monthly basis. The wholesale shipment report breaks down RV vehicles by unit category in aggregate to avoid any RV manufacturer’s specific production numbers being released.

Click on a month below to view an expanded detailed report and enlarged graph. For a comprehensive report, you must be a member of RVIA and log in to the member's only area of the association's website. 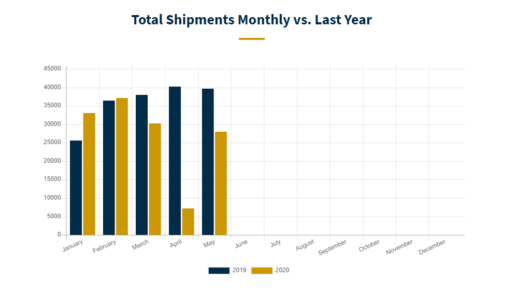 May was the first month back for the RV industry following the large-scale shutdowns to combat the COVID-19 pandemic with some manufacturers opening in early May, some not until later in the month, and none opening at full capacity. As the economy began to reopen, RV manufacturers and suppliers adapted to a “new normal,” including supply chains that were still ramping up, limited production days, and modified manufacturing processes. These challenges impacted production capacity early on but eased considerably as the month continued. By month’s end, wholesale shipment totaled 27,999 units, down (-29.7%) from the 39,838 units shipped in May 2019, according to the RV Industry Association’s survey of manufacturers. 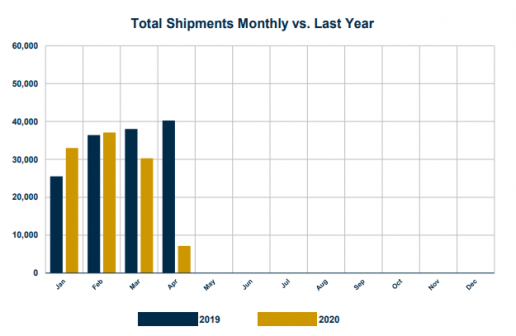 As expected, due to nationwide retail and manufacturing shutdowns during the month related to the COVID-19 pandemic response, the RV Industry Association’s April 2020 survey of manufacturers found that total RV shipments were reduced significantly, ending the month with 7,197 units. 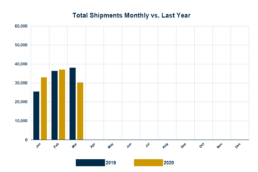 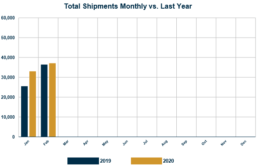 RVIA’s February 2020 survey of manufacturers found that RV shipments ended the month with 37,113 units, a 1.9 percent increase from the 36,421 units shipped last February. The figures in the February report represent shipments made before the COVID-19 outbreak and subsequent response measures made a major impact on the economy. 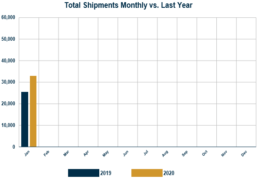 RVIA’s January 2020 survey of manufacturers found that total RV shipments ended the month with 33,003 units, an increase of 29.2 percent from the 25,540 units shipped last January.

Towable RVs, led by conventional travel trailers, totaled 29,435 units for the month, an increase of 36.1 percent compared to last January’s total of 21,623 units.