The RV world reached new heights in the 2010s, laying the groundwork for what could be an even bigger decade to come. Not only did the camper industry rebound authoritatively from the 2008 recession, it rose steadily to an all-time US sales record in 2017 and European high mark in 2018. The RV renaissance of the ’10s also saw the romanticization of the mobile living lifestyle, with terms like “van life,” “overlanding,” “glamping” and “digital nomad” gaining an aspirational mystique and a place in the vernacular. As we move into the new decade, RVs are set to continuously evolve, the forward-looking concepts of the past 10 years paving the way for smarter, more comfortable, more luxurious and more stylish RVs of every style and size. 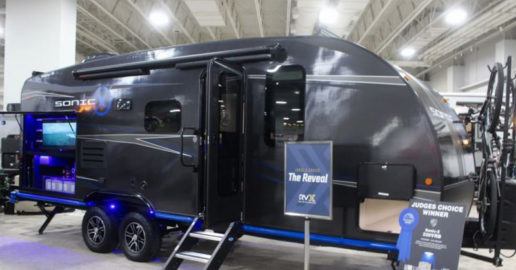 The concept: With the Sonic X concept, KZ Recreational Vehicles and parent company Thor Industries managed to inject a number of fast-growing trends into a single trailer that looked ready for the road the day it debuted. The 26-foot (7.9-m) concept trailer had its eye on off-grid self-sufficiency, relying on 1,000 amp-hours of lithium batteries, 1,000 watts of solar, 379 liters of water, and a water extraction and filtration system to live comfortably, whether just outside city limits or hundreds of miles away from the nearest slab of concrete. Multiple bike/gear-carry systems were there to ensure campers never experienced a dull moment.

The future: Increased battery power won’t only benefit RV powertrains; lithium batteries have been steadily finding their way onto camping trailer and motorhome options lists and standard equipment packages, where they can handle some or even all of the energy needs of onboard appliances and amenities. Expect to see the RV market continue to shift more and more of the workload to solar-assisted battery systems. While the production Sonic X isn’t nearly the off-grid powerhouse the concept was, 2019 did see the debut of a production-ready gas-free, all-electric caravan with even more lithium and solar power than the Sonic X concept. On a separate note, the Sonic X’s carbon fiber construction is an example of the increasing use of composites to save weight and improve fuel economy, a trend that’s already underway in both motorhome and trailer design. 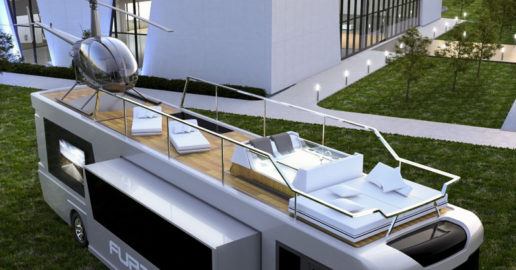 The concept: Helipads and foredeck hot tubs are amenities usually reserved for superyachts, but the good folks at luxury mobile component supplier Furrion brought them to the 45-foot (13.7-m) Elysium motorhome concept that debuted at CES 2017. Taking glamping to new heights, Furrion turned the Class A motorhome roof – usually a wasteland of air conditioners, skylights and solar panels – into the Elysium’s pièce de résistance, a yacht-like deck with a hot tub, sun pads, and a height-adjustable landing pad tailor-fit to a Robinson R22 helicopter. The cabin below was equally impressive thanks to its chef’s kitchen, triple 75-in HDTV spread, fireplace and smart bathroom.

The future: Glamping has grown from a small trend to a market-shaping force that is changing the nature of camping. In fact, market research and consulting firm Grand View Research expects it to grow into a $5 billion global market by the mid-2020s. So while the heli-ferrying extravagance shown on the Elysium might go above and beyond the motorhomes of today, glamping preferences will push camping vehicles closer to that level of opulence. At the end of the day, who doesn’t want to leap from a nine-figure explorer yacht to a seven-figure motorhome with chopper speed and precision?