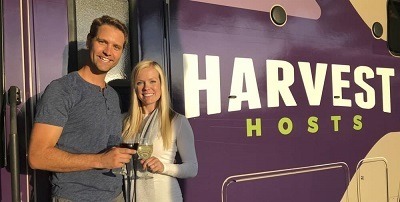 RVer membership club Harvest Hosts unveiled its newest study on consumer travel mindsets, highlighting a split when it comes to safety decisions – such as vaccine passport use.

The survey found overall “hope” for the travel industry in the coming summer months, with projections showing much different circumstances compared with last year. Americans are booking trips as vaccines roll out – yet many are running into overbooked campsites and accommodations, driving alternative options.

“The vaccine rollout is in full swing now across the U.S.,” Harvest Hosts CEO Joel Holland said. “RVing was celebrated as a safe mode of travel during the peak of the pandemic, and we are confident that in this post-vaccination phase, road travel will remain strong. In the last year, travelers have rediscovered the road trip. The survey ahead of the much-anticipated 2021 summer travel season shed light on the planning that is already underway, where the most popular destinations will be and what we can expect out of the RV community.”

“Only 17% of respondents have allocated less budget to travel this year than last, indicating a strong desire to travel and plan for this year,” Harvest Hosts stated.

Of total travelers surveyed, 20% said they would decline to show it, even it meant not entering an area or event.

“Around one-fifth of respondents were undecided on the issue, and could eventually impact how these businesses decide to operate in the post-vaccination era,” Harvest Hosts stated.

Campsites are overbooked in the pandemic’s wake, the club stated, and many RVers are taking notice of limited vacancies and inflated prices. The notion is driving many RVers to seek alternative locations.

More than half of travelers are booking trips now, the survey found, with only 9% of summer travel plans already booked.

Many travelers expressed interest in exploring locations that are not campgrounds, the survey found, with 59% noting national and state parks. More than half of travelers, 56%, said they would most like to explore the West Coast. The least interest was found in the Southeast.

Employment, age and income are main factors in travel decisions, the survey reported. About one-third of respondents said they planned to spend two weeks to a month on the road this year. Within that group, 53% said 2021 travel budgets are in the $1,000-$5,000 range. The numbers are similar to 2019, Harvest Hosts stated, indicating travel is picking back up to pre-Covid levels.

“Overall, the study validates what everyone has been feeling the last year, which is the innate desire to travel,” Harvest Hosts stated. “People are ready, and while many want to do it the right way, there are still strong feelings on both sides regarding precautions such as vaccine passports. This is a decision that will ultimately come down to the business themselves to decide, and data like this should be taken into account. While the COVID-19 pandemic is fading, the new discussions around vaccine passports, indoor capacity and masks are here to stay.”