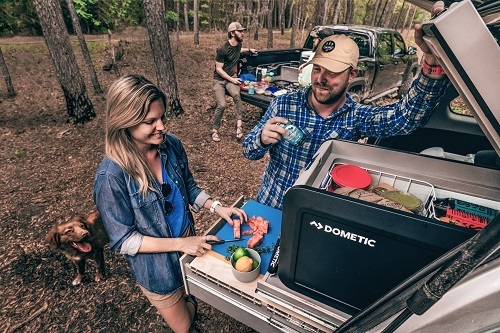 Dometic launches the next generation of its popular powered cooler: the CFX series. The new generation of CFX3 models are not only superior in design, but also in performance. Products includes a model equipped with a rapid freezing plate making it the world’s first. Dometic intends to expand its customer base by releasing the product globally with expanded sales channels.

Prior to developing the new cooler line, the company did extensive consumer research. Studies have shown consumers want to maintain their everyday life rituals even when they are far from home. Active people on adventures still want fresh and healthy food without having to limit the time they spend off-the-grid.

The CFX3 offers Dometic’s market leading VMSO3 variable speed compressor with optimized software for better cooling and power consumption. Combined with its capability of consistently maintaining refrigerated or freezing temperature down to -7 degrees Fahrenheit, the CFX3 allows outdoor enthusiasts to go even further and stay longer on their adventures without the need for ice.

The Dometic global design team created this generation of premium coolers focusing on consumer behavior and needs. The CFX3 has many features including an enhanced user interface, easy-to-open latches, heavy-duty yet lightweight construction, improved LED lights and solid anchors to secure the unit inside vehicles. At the same time, the CFX3 retains the ruggedness outdoor enthusiasts require.

The coolers have received upgrades including a high-resolution color display and soft touch buttons enabling seamless control and monitoring of performance via Bluetooth. Bluetooth is a more reliable connection and uses less energy than Wi-Fi. The CFX3 now has a more powerful USB charger to power devices like mobile phones and tablets faster. In addition, the new user interface meets IP65 protection standards and is certified weatherproof.

CFX3 App
For better control of the cooler from mobile devices, the new Dometic CFX3 app provides new visual graphing of temperature and power consumption to allow monitoring of performance over time. The Bluetooth connection gives users control at their fingertips without having to enter a password for Wi-Fi access. By opening the app, they can quickly check the power and adjust the temperature. The app also alerts consumers when the temperature deviates from the set level.

Built-in Ice Maker
Company officials report the Dometic CFX3 55IM model has a unique function first in the market. The single-zone cooler has an independently refrigerated rapid-freeze plate chamber inside the unit with silicon ice-trays that can make ice, while running the main compartment as a refrigerator.