EXCLUSIVE: Dealers Say Inventory Replenishment Could Be 2 Years Out 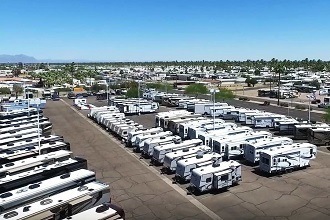 Dealer inventory shortages might last longer than expected, according to the results of Thompson Research Group’s Q3’21 RV Dealer Survey.

The survey found dealers saying the inventory timeline replenishment continues to lengthen. Three months ago, the consensus was restocking sometime in mid-2022. The latest survey shows dealers expecting it will be late 2022 or even into 2023 before the inventory issue is resolved.

“I thought it could be possible,” TRG founding partner and CEO Kathryn Thompson said. “When you are either working down inventories or getting to a reasonable level, it always takes a little longer than you think.”

In a vacuum, TRG’s report from the survey stated, the third quarter was another strong demand quarter. However, there is a greater variation in sales figures, as there is a lack of uniformity in ability to get units.

“Who gets product though, the haves and have-nots, is more distinct this cycle,” Thompson said. “There is greater variation. So when we see some people report sales being down that is not necessarily a reflection of demand but more the ability to get product.”

Lead times remain long and well above historical norms, the survey found, with supply-chain bottlenecks delaying deliveries and keeping manufacturers from taking backlogs down. In addition, quality issues are a concern.

“While not the same quality issues as the previous RV boom saw, it is still quality control challenges that work their way through the supply chain and are addressed at the OEM or dealer level,” the report stated. “Many dealers reported dealing with these issues on the lot as the units come in or by educating customers that if you want a unit faster you might need to be a little flexible on certain items.”

Among the parts issued encountered are substitute items such as different colored cabinets than originally ordered or alternative furniture pieces. However, Thompson said the challenges are not RV manufacturers’ alone.

“I don’t know that I would beat up the RV industry more than any other industry,” she said, “but we are seeing where someone orders one color cabinet and you are getting another color in. Those small product issues we are seeing in a wide variety of industries, not just RV.”

The report stated OEMs are left with a conundrum of waiting for the right parts or using alternative parts that get the job done. Survey feedback pointed to the issue as a factor more with smaller OEMs and suppliers rather than the larger companies able to manage around challenges.

One dealer in the South explained a situtation involving alternative furniture.

“One of our RVs came with electric recliners but with no plug behind to plug into,” the dealer said. “What happened was the OEM putting it together could not get a regular couch so they just used the electric furniture they had in stock.”

“It’s hit or miss,” another dealer said. “One unit could be perfect and the next might have a bad fridge.”

Dealers often respond with empathy toward manufacturers, especially when they are happy to receive RVs to display.

“Manufacturers are rushed due to lack of people to work, so we’ve noticed the quality isn’t quite as high coming onto the lot,” a Midwest dealer said. “But that’s mostly small stuff that can be fixed at the dealership.”

Higher freight costs also are weighing on product pricing. Although inflation is apparent in all supply-chain aspects, from materials to labor to freight the survey found, freight is most notable. Freight costs continued to rise since the second quarter.

Dealers responded that lead times remain long, with some saying wait times were to to three months and others citing seven- to nine-month waits for high-end products or motorhomes.

“Lead times and the supply chain is getting better,” a Southern dealer said. “Still nowhere near it used to be, but definitely somewhat better.”

Demand levels, meanwhile, remain strong. Dealers in the survey were optimistic the demand for RVs post-Covid is higher than pre-Covid even after slowing sequentially from the rapid spike in mid-2020.

“No dealers reported concerns (yet) that the industry is approaching the over-supply scenario that played out in 2017/18 given 1) we are a long way from meeting current demand with backlogs and lead times where they are, and 2) demand is expected to remain a level above historical trends,” the report stated.