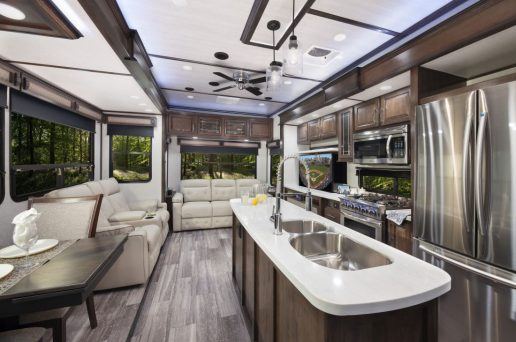 Dutchmen RV rolled out initial units of its new Yukon model this month as the OEM’s first high profile fifth wheel in years.

Designed for long-term trips or residential living, the 42-foot-long Yukon features eight-foot-tall ceilings and can sleep up to ten people. Dutchmen offers two models of the new Yukon, the Yukon 410RD and Yukon 400RL, weighing in at around 14,000 lbs. The majority of these new Yukon RVs are now either at dealerships or already in the hands of end users.

General Manager Josh Staley said Dutchmen began producing the units in March, but could not complete the Yukon line until mid-May due to the coronavirus pandemic.

However, that quarantine-induced snag in Dutchmen’s Yukon launch seems to now be in the rearview mirror. Staley said the first run of around 75 Yukon RVs sold out quickly, and that the company is hearing good things from its dealer partners and end users.

“All of the Yukons are at dealerships right now or with consumers,” Staley said. “We sold out the entire first run, so that was a good thing for us, to see that customer support.”

Staley said the Thor Industries company is firing at “110% capacity” right now, hoping to capitalize on a surge of new RV buyers in the time of coronavirus. Thor Industries resumed operations at its U.S. facilities this month under new safety precautions after a mid-March shutdown.

“It’s been a little bit of an adjustment, but people were just really happy to get out and back to work,” Staley said.

The Yukon is a high profile fifth wheel with a focus on spaciousness and living, which Staley said will be a draw for people considering the self-isolating aspects of an RV.

“It seems like hopefully we’re going to be gaining a whole new segment of buyers who have never bought an RV,” Staley said.

The kitchen space resembles a modern residential kitchen, with seating for dining and a double-basin sink on a center island. The Yukon aims to be a seamless transition from residential living to RV life for people looking to hit the road in comfort.

“We knew if we were going to do it, we couldn’t just copy somebody else and go out there,” Staley said. “We had to make it different to really bust into the space. Dutchmen hasn’t had a high profile fifth wheel for a number of years, so it’s a new segment for us.”

Staley said the Dutchmen team designed the Yukon with a homeowner in mind, and broke the coach down into five different ‘zones’ that function as different rooms. He said that design strategy gives the Yukon a comfortable and familiar feel.

Staley described the ‘zones’ as bedroom, bathroom, kitchen, living area and outside.

“People buy houses for two reasons: kitchens and bathrooms,” Staley said. “The big thing is really the bathroom. No one’s ever done a bathroom like we’ve done, really, we just blew up that whole area and made it much bigger.”

The bathroom includes a large walk-in shower, washer and dryer and a dual vanity. Staley said the bedroom and other spaces have “200% more drawers” than other high profile fifth wheels.

Dutchmen hopes to capitalize on nationwide consumer trends toward self-isolated vacations and outdoor recreation. Staley said the company is looking forward to bringing in new buyers motivated by social distancing norms and the desire to get back outside.

Click here to read more about the new Yukon from Dutchmen.