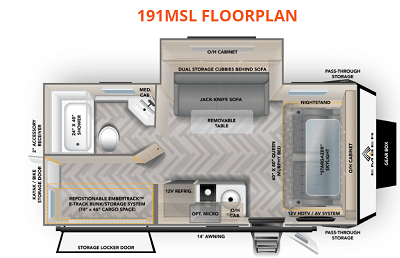 Ember RV introduced a new floorplan to their lineup, the 191 MSL Overland Series. The new plan is based on the company’s award-winning 191 MDB floorplan with several distinct changes, most notably the addition of a flexible E-Track rail system.

Ember RV will showcase the new model in Flagstaff, Arizona, at the Overland Expo West show May 20-22.

According to Ember RV COO and Vice President Chris Barth, the 191 MSL came about after a Josh the RV Nerd YouTube episode featuring the 191 MDB garnered over 200,000 views and elicited over 1,800 viewers’ comments.

“The audience responded in a crazy manner that we were not really ready for.” Barth said. “The comment section was full of people congratulating us and getting excited about new offerings. A whole bunch of people gave input in an open dialog forum. All sorts of stuff came in. We decided to dig in and read the comments. People were saying, ‘I love this floorplan, but… I don’t need it this way. What if it were this way… what if we could use the space differently? There was a huge outpouring of requests and conversations with customers.”

Ember responded by developing the new floorplan in about four months, Barth said.

For the 22-foot 191 MSL (Murphy/Sofa/Locker), Ember replaced the dinette with a slide out sofa/Murphy bed with rear storage. Designers removed the double-over-double bunks in the rear and replaced them with an E-Track bunk and storage system.

From the factory, customers receive two single bunks that slide into  the E-Track and move up and down. Bunks be converted to desk space or removed completely. The bunks are the size of camp cots, can each hold 300 pounds and come with mattresses covered in teddy bear fabric.

The floorplan also features a large cargo door in the locker area complete with a removable screen to easily load gear and provide ample airflow when stationary.

Because E-Track is a commercially available system and accessories are orderable online, the tracks’ inclusion gives the 191 MSL RVers various readily available choices for using the space, Barth said.

Flexibility is what customers indicate they want more than anything, Barth said.

Dealers had customers say they want to use the flexible space as a home office, bunks for kids, a walk-in closet, kayak storage or attaching D-rings to hang a hammock and look out the screened-in back door while camping.

As reported by RV News in the November 2021, Ember RV launched its first four RV models in September of 2021. The company now has just under 90 employees and is growing. Since the company began, the manufacturer experienced zero turnover. Barth says the continuity is a testament to founder and CEO Ashley Bontrager’s strong leadership and clear vision.

The company makes eight RVs a day, a number Barth says is supported by organic growth.

The 191 MSL is built on Ember’s Trailblazer Chassis featuring a Curt independent suspension with heavy-duty coil springs and dual shock absorbers on each side along with standard Goodyear off-road tires. It includes a 55-gallon freshwater tank, 35-gallon gray tank, 35-gallon black tank and a standard solar package.

“From the beginning, I have challenged the team to always stay open to listening to what our customers are saying, remain nimble enough to respond accordingly when we can and stay open to innovation,” Bontrager said. “The new 191MSL is a perfect example of what listening to your customers can do for innovation and the result the team produced is exciting. I am very proud to bring this unique offering to market and eager to see what our customers will do with the customizable space.”

Some 191 MSL units will be available at the end of this month, Barth said. To learn more about the 191MSL and view a 360-degree tour of the floorplan, click here.