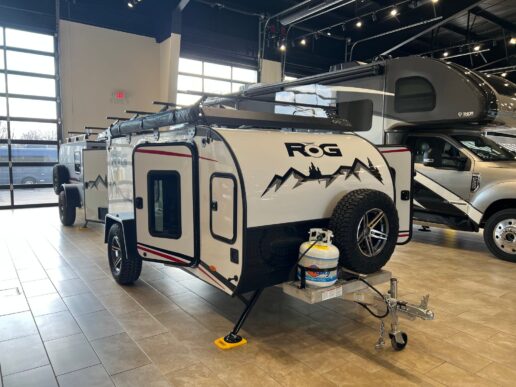 The Encore RV team delivered its first RVs to two dealerships in December.

Mount Comfort RV, of Greenfield, Indiana, and Campers Inn RV, of Naperville, Illinois, accepted the first Rog 12RK shipments. RVs hit show floors around the beginning of the year, and some already sold, according to Encore RV CEO Rich Schnippel.

Schnippel launched the company in September after a two-year hiatus from the RV industry. He previously worked at InTech, KZ RV and ATC Trailers. Schnippel initially intended to launch units at the Elkhart Extravaganza, but the cancelled event stopped those plans.

One of the main selling points to consumers, according to feedback Schnippel received from the dealers, is the included 8,000 BTU propane furnace.

“That was one of the things that when we did research, we heard that the small adventure trailers are great, but there are no heaters, no furnace,” Schnippel said. “Additionally, we have included 38 gallons of water on that little trailer. Been a lot of hit things, one of those things where we checked off what we wanted to see in an RV.”

The Rog is about more than 7 feet long, and only 48 inches tall inside, weighing 2,500 pounds.

Schnippel said his business is growing quickly, and the biggest challenge he is facing is overextending by signing too many dealers.

“We are trying to grow in a controlled manner,” he said.

The company has eight dealerships lined up for 2022, but Schnippel said over 100 dealers reached out for possible shipments. He said this is in part due to the current inventory shortage on dealer lots. That also is impacting his upcoming show schedule.

“We will be at several shows, but not the big ones. We will not be at Tampa,” Schnippel said. “I do not have a Florida dealer, and just do not have time to do that.”

In the upcoming months, Schnippel said he hopes to release a set of accessories that would mimic that of Jeep upgrades and accessories.

“It will revolve around the roof rack system,” Schnippel said, “including lights for all four corners of the trailers, a roof ladder, brackets for almost anything you can think of.”