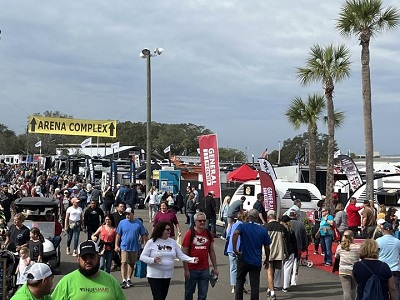 The 2023 Florida RV SuperShow may be the second-largest show conducted in its history, according to Dave Kelly, Florida RV Trade Association’s (FRVTA) executive director.

Although final attendance figures were not yet available Monday morning, Kelly estimated the Tampa attendance to be in the upper 70,000s. If true, the 2023 show would be the second-largest in its history to the over 84,000 attendees in 2022. The previous second-highest total occurred in 2020, when 74,861 consumers attended the five-day event.

Though demographic information had not yet been finalized, this year’s event brought out what appeared to be a younger crowd. While years previous saw a majority of retirees attending during the week, Kelly said this year many families and kids attended not just on the weekends, but during the week as well.

“From what I could tell, everyone had a great show,” Kelly said. “Talking with General RV and Lazydays they all reported, if not record sales, pretty darned near… the vendors were all pleased with the traffic. It looked like there were a lot of sold signs on coaches.”

The SuperShow hosted educational seminars each day. This year, FRTVA scheduled a different series of seminars each day to offer more choices to multi-day pass holders. Record numbers turned out for most of the sessions, with several standing-room-only sessions, Kelly said. Sessions covering lithium battery technology, solar power use and a class titled, “Tips for Choosing the Right RV for You” were favorites.

Camping at the Florida State Fairgrounds was sold out with over 800 RVs at the rally with 30-amp power, coffee and donuts and daily entertainment provided. About 150 RVs boondocked in the parking lot.

“They are very important part of the show to us,” Kelly said. “Those campers come in and out of the show several times a day. They are already buyers and already committed to the industry, so it is important that we have them at the show.”

The large numbers of campers and attendees equaled brisk vendor sales, Kelly said. Show participants bought up suppliers’ stock of parts and accessories at the show.

“I had vendors say they had to reorder stock because stuff was flying off the shelves,” Kelly said.