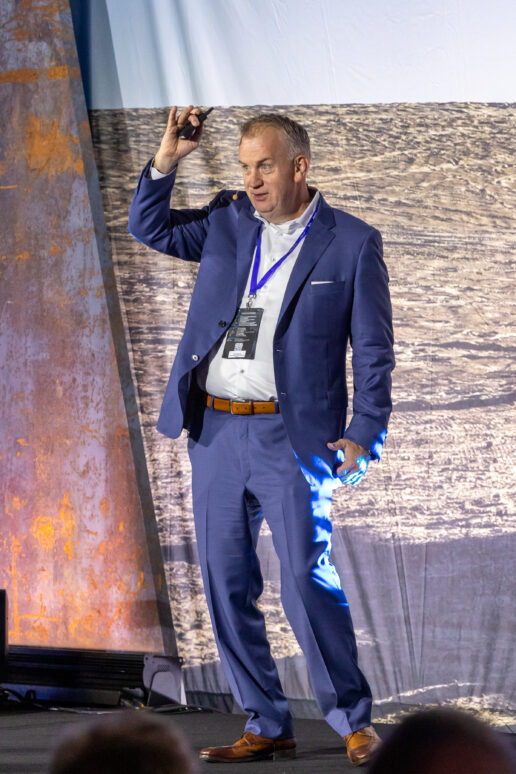 Jayco leadership addressed a record crowd at its first in-person, off-site dealership meeting since 2019, telling dealers that the RV manufacturer wants to be their best partner.

Vice President of Sales Nic Martin told the more than 550 attendees from more than 300 dealerships to speak up during the three-day event at Nashville, Tennessee, to help Jayco be a better partner to its dealer body.

“The only way we are going to reach that goal is getting feedback from you guys of where we can improve because we could not be more intent on making things better,” he said. “So do not be a fly on the wall. Give us the feedback, good or bad. We can take it.”

“Culture is one of the things we are rooted in and that has not changed,” Walters said. “As we look out there is a really long runway at Jayco, a runway for growth to do this for a lot more years.”

Walters called out pre-delivery inspection changes the past three years in discussing quality. He said the company did not PDI towables in 2019 but by June 2022, Jayco conducted PDI inspections of all its motorhomes and towables manufactured in Idaho. Walters said Jayco performs PDI inspections on 60% of its towables made in Middlebury, Indiana, today and has a goal of reaching 100% by the end of the year.

To achieve the goal, Jayco has a new PDI facility expected to open in Middlebury in October.

“We know it is making an impact on the quality of the product,” he said. “I am not standing up here in front of you and telling you that it is perfect … but we know that it is making a difference.”

Walters said as other companies looked to expand manufacturing lines to meet increased consumer demand the past two years, Jayco did not.

“We have not added additional square footage for production in regards to new buildings,” he said. “We did juggle a lot of lines, we had an empty line or two that we were able to start up and build more product. But we made a decision in the midst of the craziness way before we knew that the market was going to slow that we would invest in another PDI facility. At a time where other people were investing in more and more and more and more and more, I hope the message you get from us is we are spending our money on quality.”

Walters closed by addressing the changing market. He told dealers Jayco was making manufacturing decisions based on dealers’ inventory and registrations, without considering Jayco’s backlog.

“We know the market is changing,” he said. “We are not naive to stand up here and say, buy more, buy more. We are going to sit in front of you guys and ask you to take give us the time with the business plan. We are going to work to manage inventory levels through production.

“We know the market is going to be small,” Walters said. “We know the market continually is changing. It has probably changed today from what it was yesterday. You guys have been loud and clear that the goal is to gain share. Our goal is to be your best partner. There are dealers in the room we have been your best partner for 40 years. We are not going to stop working on that.”