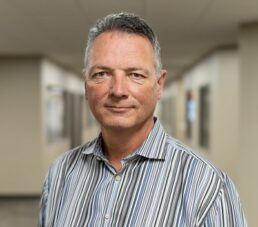 Keystone RV welcomed back Jeff Rank, a former decade-long employee, to its Arcadia team after a health setback that Rank said is “just kind of a fact of life.”

Rank left Keystone in 2008 and spent 11 years as a general manager at Prime Time Manufacturing, a Forest River division.

“In 2019, I was diagnosed with cancer,” Rank said. “Realizing that I had a rough road ahead, I resigned [from] my position at Prime Time and took a corporate job at Forest River while undergoing treatment and recovery.”

Rank said he was still working for Forest River corporate, but recovery kept him somewhat out of the RV industry last year.

His health improved and he was well enough to return to work at the end of last year. Rank then contacted Keystone RV and learned about the company’s Arcadia plans.

“It was really an unbelievable opportunity,” Rank said. “Opportunities like this are very rare in our industry.

“The more I learned, I got more excited,” he said. “It may be a bit of an unusual step to go from where I was to now, but given my situation and health, this is a perfect opportunity. I’m thankful to be healthy and working again.”

The company debuted Arcadia, its new fifth wheel concept, at the Florida RV SuperShow in Tampa, Florida, on Jan. 13.

“In hindsight, [Montana and Cougar] were two iconic brands in the RV industry,” Rank said. “Those brands grew, and I eventually became a product manager.”

Now that he is back, Rank plans to stay with Keystone as a sales team member, he added, with long-term plans to eventually cover the Gulf Coast territory. For now, he is in Indiana assisting the Arcadia team and wearing many hats while doing so.

“People probably will have questions,” Rank said. “Somebody in management for 15 years sort of disappeared and now he’s back.

“I’m fortunate that I am one of the ones that was able to do it,” he said.