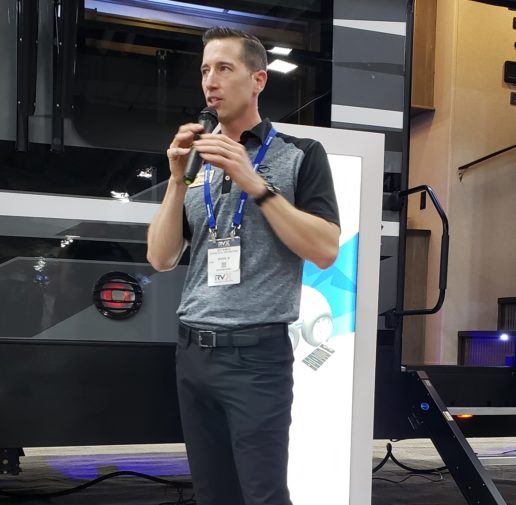 While January wholesale shipments released by RVIA Tuesday may have taken some by surprise, it didn’t come as a shock to those on the industry’s front line.

Towables for January, according to the report, were up a whopping 36.1 percent. Both travel trailers (+35 percent) and fifth wheels (+48.3 percent) posted huge year-over-year gains. In fact, RV OEMs shipped more than 29,000 towables to retailers in the first month of the year.

Jeff Runels, president and CEO of Keystone RV Co., sees a lot to be optimistic about as the winter RV show season hits its stride.

“I’ve only been to about half of the shows so far, but the biggest takeaway I have is, the retail customers are out there and they are looking,” Runels said. “We’re seeing a really good high-end fifth wheel market. The Montana line, for example, is enjoying a really good show season, which it didn’t have last year, and our toy haulers are having a really good start.”

Another positive takeaway from early shows, Runels said, is the creditworthiness of show attendees.

“The first week or two weeks of every show season, you get people coming out to test their credit again,” he said. “This year there were a lot of good scores, and I think that helped us in the first few weeks of the show season.”

That said, Runels hesitates to subscribe completely to the huge year-over-year gains highlighted in the January report. He noted last year’s shipments were impacted by weather and, to a limited extent, some ordering reluctance from dealers still working through an abundance of inventory.

“That storm last year really hurt our ability to get everything out,” Runels said. “It actually took through February to clear through things. This year, we didn’t have a weather issue to contend with and dealers needed to get stocked up.”

However, Runels pointed out that even had all shipments been made on time last year, the January 2020 report would still reflect an upsurge. In fact, the most recent industry forecast by independent industry analyst Richard Curtin may fall short. Curtin’s prediction, made in December, calls for a slight drop off in total 2020 shipments, to 386,400 units.

“Part of the reason for that is, this industry has taught us that an election year is not predictable,” Runels said. “That influences our forecasts. But I believe it’s too conservative.”

The one thing Runels said may impact shipments, at least in the short term. Concern regarding the coronavirus currently sweeping through parts of China and elsewhere may have an impact.

“We’ve already seen the stock market take some big hits the past few days due to the coronavirus and what’s happening with the supply chain in China,” Runels said. “You’re going to see a lot of publicly traded companies start to pull back earnings forecasts—not because they are sure anything will go wrong, but because they don’t know. And with everyone else thinking they will be affected by it, we’d be foolish not to think the same. The big questions are when and if it will hurt us, particularly through the heat of the season.

“It hasn’t affected us as of yet. We are still right where we expected to be, based on our internal forecasts,” Runels said of Keystone RV. “Like every other company, we’re on notice that it could affect us, but I’m cautiously optimistic that we will be able to fight through it and it won’t affect our production. In a year I believe could be better than predicted, that’s a good thing.”