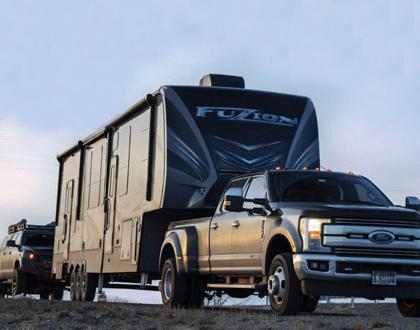 In September, motorhome prices rose 7.2% from August, while travel trailer and fifth wheel prices fell 9.3% from the same month.

Eric Lawrence, principal automotive analyst for specialty vehicles at Black Book, said this movement caused him to be uncertain about where used vehicles prices could go from here.

“What I like to see is when the motorhome and travel trailer values all move in the same direction,” Lawrence said. “It lets me know that the market is stable if everything is flat, going up or going down.”

However, in August, motorhome values dropped 7%, before “bouncing” back to the second-highest value recorded. Travel trailers could be poised to do the same, Lawrence said, but until new data comes in, predicting a market curve is nearly impossible.

Lawrence noted older vehicles typically depreciate, but used travel trailers and motorhome prices swung up in the past year.

“These are not depreciating as they get older like they should be, prices are actually going up,” Lawrence said. “We expect at some point that they should flatten or depreciate as every asset does. But right now, I do not know why they are bouncing up and down like that. It is a mystery.”

Lawrence said used RV prices typically have an annual cycle — in the spring, prices go up. In autumn, prices go back down as demand falls.

“It is just weird that they are bouncing around like this,” Lawrence said. “Is it a trend? Is it just the selection of vehicles that happened to be sold this month? Is it just vehicles in worse condition sold this month, or motorhomes sold in great condition? There are lots of intangibles to account for.”

Lawrence said no answers will be found until data for October, and perhaps November, is released. He said before September’s data was released, he anticipated prices heading to a more stable range, perhaps setting the “new normal.”

“Looking at a long-time curve will make more sense,” he said. “This is a story designed to be seen in two parts. I am dying to know what is going on right now, but until I have the data at the end of the month, I do no know what prices will be doing.”