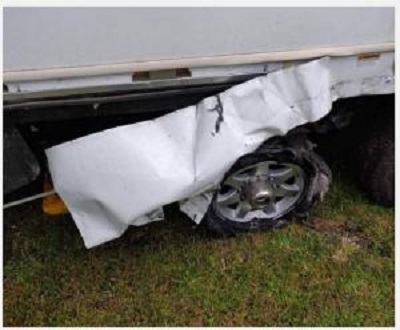 The company’s new RV-De-Fender limits space between the tire and the RV, and absorbs as well as redirects destructive forces when a blowout occurs, the company said.

Mike Pahl, service manager at Legacy RV Center in Salt Lake City, Utah, said he met the RV-De-Fender team at a “Ride for Life” charity event and instantly believed in their product.

“What RV-De-Fender has created is something that allows you to have a violent and prolonged tire failure, with a minimum of damage, so you can pull over and put your spare tire on and continue to your destination without losing a single day,” Pahl said. “The RV-De-Fender series are an indestructible, as well as a stylish addition to any towable coach.”

The system mounts directly to a trailer axle and fits closely around each tire on various model towables. The De-fender is designed to limit damage in three stages:

Partners Zack Patterson, Greg Bowen and Todd Smith grew up camping in RVs and have experienced frustration dealing with a flat tire which has ruined vacations and robbed their families of memories.

“We crawled under hundreds of trailers to find a way to mount a safety device that would protect the trailer after a tire blowout. We realized that there are a lot of different configurations under trailers with wiring, hydraulics, propane lines, shocks and other obstacles which caused problems for mounting our original design,” Patterson said. “Todd came up with the idea to mount our system directly to the trailer axle, eliminating nearly all the obstacles and giving us a way to build a more universal product.”

The product is designed to bolt on to an axle using existing holes, no cutting, welding or grinding is necessary, the company said.

After working out minor engineering issues and battle-testing the product, the partners knew they had a viable defense against blowout damage.

“I had enough faith to test this on my own RV,” Patterson said. “I had 100% belief that this thing works. After successful tests, we really knew we had something special.”

In September 2022, the team received a patent on the safety device. The company is currently doing an organic rollout and working to build up inventory, Patterson said.

The company has developed a prototype for 8,000-pound axles and is examining a solution for disc brakes, Patterson said.

Patterson said the company’s top goal is to have the RV-De-Fender be an OEM option installed on every towable; he plans to coordinate with dealers. RV De-Fender is also establishing a network of certified mobile technicians to install the device.

While currently conducting most of its business directly with consumers, the company is working with a few dealers and is open to and looking to find distribution nationwide, Patterson said.

“The owners that have come in to get their unit repaired from a blowout almost always leave with the RV-De-Fender system protecting them everywhere they go,” Pahl said.