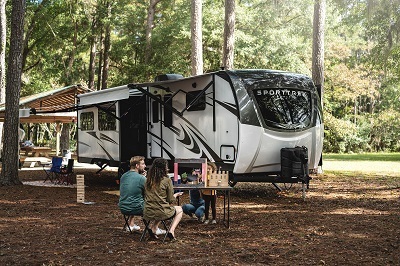 The unit sleeps as many as 10 and features amenities in its bunkhouse room. The room has bunk over bunk beds on either side of the room, but has flip-up beds on one side, providing a desk space to convert into a work area.

The lower bunks also can be connected to create a king sized bed. Venture RV stated the room also could convert to a “pet palace.”

“With homeschooling and e-learning, families and children do not have to be at home, so it makes it easy for them to hit the road,” Venture General Manager Dave Boggs said.

Boggs said that meant Venture RV wanted to create a floorplan that would accommodate larger groups over longer periods of time. The first place the design team looked to was the bunkhouse room.

The room begins with quad bunks, but also can be set with two queen beds. The flip-up bunks provide schooling or remote work area with an oversized desk and extra headroom with the top bunk also flipped up.

“We wanted to make a desk where you could have a learning station or work station,” Boggs said. “We are really good at designing bunks, that kind of our niche, so once we have a bunk that can sleep four people, now it is about, how can we entertain that many people on an extended trip?”

The interior features a farmhouse décor, with an entertainment center and fireplace opposite a jack-knife sofa or theater seating. A four-person dinette is adjacent to the sofa, although Boggs said an optional king lounge provides enough space to create a sectional sofa which can seat an entire family. 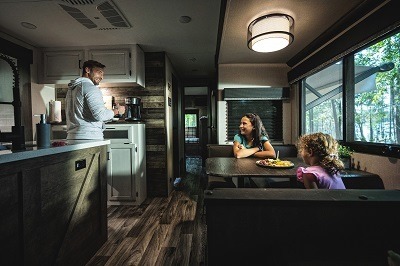 “That has been a big hit,” Boggs said.

The master bedroom features a queen bed slideout, a dresser with built-in electric fireplace and washer/dryer prep. In addition, there is a window seat at the front cap.

“The window seat is another viewing area, seating area, a place where someone can get away for a little bit,” Boggs said.

Technology additions include a Level Mate Pro, which allows consumers to use their phone to check the leveling settings, as well as the IRV control system, which provides Bluetooth access to awnings, slideouts and tank levels.

The fireplaces each have 15-amp service to create additional heat without the furnace running, Boggs said, and the underbelly is enclosed and heated.

“It is built like a luxury fifth wheel on one level,” he said.

The reaction thus far has been positive. Boggs said dealers ordered units before they were ready to ship.