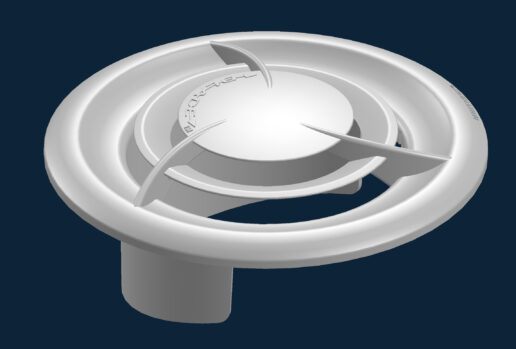 Recognizing that there was a disconnect between new high-output air conditioners and the systems used to distribute cooled air throughout an RV, the Keystone’s Innovation Lab team leveraged core fluid dynamics principles to redesign the air distribution system. The company said elbows and wyes with larger intake openings that taper into the ducting will now reduce air turbulence and increase cold air speed throughout the RV ductwork.

Blade introduces a new vent design that uses negative pressure to drive air flow into the cabin. The Blade vent diffuser eliminates hot and cool spots by distributing cold air in a circular pattern and setting up natural convection throughout the coach. The Blade system reportedly eliminates the reliance on foil tape alone by adding injection molded components at each system joint. The company said Keystone RV is the first company in the industry to do this.

Blade builds on a recent string of Keystone RV innovations focused on reinventing fundamental RV systems and components for a better camping experience and long-haul performance.

“The Keystone Innovation Lab is changing the way RV’s are built.” Keystone RV President and CEO Jeff Runels said. “Because of this team’s discipline and drive, Keystone RV buyers not only get great floorplans and features, they get the added assurance of having the most advanced core-build thinking in the industry,”