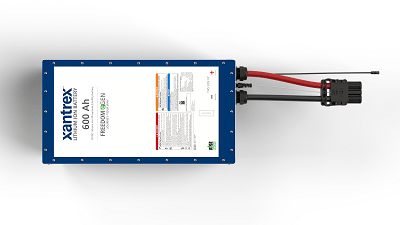 Over the past decade, lithium batteries have gained attention for their prolonged service life and high energy density. Paired with reduced costs because of high production volume, the batteries were popular enough to be added to the 2020 ANSI Low-Voltage Standard, an RVIA press release stated. When that happened, lithium batteries were included with flooded or lead-acid battery provisions, which require batteries located in the RV interior to be placed in vented compartments for user safety.

Lead-acid batteries installed in RVs produce hydrogen gas when being charged, requiring a way to vent. The charge cycle of lithium batteries, though, does not require a vent. With the existing and growing popularity of non-vented batteries, it seemed no longer necessary for lithium batteries to be put in vented boxes, RVIA stated.

“Real estate is premium in RVs,” Bruce Hopkins, RVIA VP of standards, said. “There could be four batteries in a compartment on the front of the trailer competing for space from propane cylinders. [The adjustment] allows more flexibility for manufacturers.”

Hopkins noted that the cost of lithium batteries is much more than their traditional counterparts, ranging from $800 to $1000 or more for one battery. Having such expensive equipment sitting outside the RV could present a risk, he said, especially when multiple batteries are in one compartment.

Although lithium batteries are expensive, they could last the user eight to twelve years, Hopkins said.

Mitul Chandrani, director of marketing at Xantrex, a technology brand that supplies batteries to RV manufactures, said the majority of his company’s customers were interested in lithium power.

Along with a more powerful output, lithium batteries typically weigh less than traditional batteries. The RVIA’s adjustment would allow for the non-vented type to be installed under the RV’s bed or sofa, Chandrani said.

Although Xantrex lithium batteries already are being installed in some units, such as the Winnebago Revel, Chandrani expects manufacturers to make it a standard in the near future.

“I’m really pleased with what the RVIA is doing,” he said. “Space is precious and premium. It definitely opens things up.”

A third-party listing agency recognized by the RVIA must give lithium batteries an independent seal of approval to be included in RV products, RVIA stated. That stamp addresses thermal run-away, limiting high current output, cell balancing and whether the batteries have a protection system to provide safety in high or low voltages and temperatures.

“We look at [batteries] as basically energy in a box,” Hopkins said. “But in reality, it’s more of a system that delivers specific energy.”

Last month, the RVIA Board of Directors approved a recommendation from the Standards Steering Committee to permit non-vented, lithium batteries inside the living space of the RV, without venting. Manufacturers who install lithium batteries will need to have multiple warning labels that educate consumers “to not replace a non-vented battery with a vented battery.”

These warning labels will be placed on the RV adjacent to the non-vented battery’s location, as well as affixed to the battery and on the inside and outside of a case or compartment, if provided. A warning statement also will be included in the RV owner’s manual.

“RVIA’s signature initiative is to promote the enhancement of safety through industry standards during the construction of RVs,” RVIA stated. “The adjustments made on lithium batteries shows how the industry comes together to make best practices decisions that lead to a better manufacturing environment and consumer experience.”