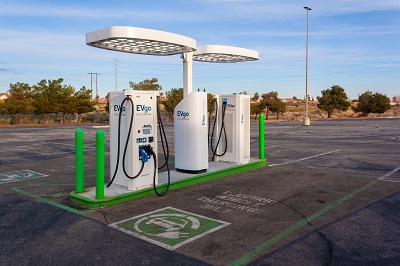 The RVIA Government Affairs Team initiated lobbying efforts to expand e-RV infrastructure. The team received approval to begin lobbying from the association’s board of directors earlier this month.

The group’s work is being supported by the Infrastructure Investment and Jobs Act.

Landers said that consumers with an electric tow vehicle would have to uncouple their trailer, find a place to put it, charge the tow vehicle and reattach the trailer. Additional pull-throughs for electric RV set-ups are needed, he said.

With the Infrastructure Investment and Jobs Act now signed into law, $5 billion has been set aside for the states to improve their EV infrastructure, to help the U.S. move towards EVs and away from internal combustion. Another $2.5 billion remains with the federal government to spend on national infrastructure. The Government Affairs team is hoping the funds will help create more pull-through sites suitable for e-RVs, RVIA said.

“Our team is working with the Outdoor Recreation Roundtable and receiving their support on this initiative. We are also working with a national lobbying firm to help spread the word,” Landers said. “We have found some support from the Federal Highway Administration, which put out a statement in the Federal Register announcing that pull-through sites would be considered.”

The Government Affairs team is reaching out to state transportation departments,  governor’s offices and economic development offices. The team plans to work with member companies whenever possible on this initiative.

“The Government Affairs team is thankful for the support of the board in these efforts,” Landers said, “and we look forward to providing some real results in mid-2023.”