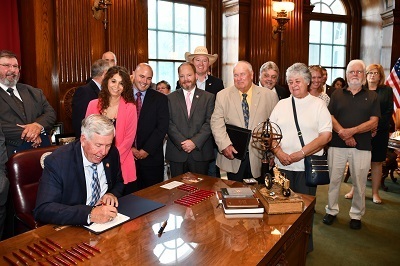 The associations said the bill specifically offers owners, operators and employees of campgrounds and RV parks protection from frivolous lawsuits when an injury or death occurs as a result of an inherent risk of camping. The bill does not shield a campground or its employees when injuries result from willful or wanton disregard for safety and clearly outlines the types of warning signs that operators are required to post.

ARVC supplied MOARC with the model language for the bill that was then amended as it went through the process. ARVC and MOARC leaders testified before the state Senate Committee and reached a compromise on wording that alleviated possible opposition.

“It is a big win for our industry and shows the strength of state organizations and national ARVC working together,” said Paul Bambei, ARVC President and CEO.

“The inherent risk legislation is as an important tool to reduce frivolous lawsuits for campgrounds,” Helms said.

Wisconsin was the first state to pass an inherent risk bill in 2016. The bill has served as a guide for other states looking to pass similar legislation.

“Thanks to the efforts by MOARC and ARVC, Missouri built on the law Wisconsin passed in 2016 to enact the best liability legislation in the U.S.,” Wisconsin attorney Mark Hazelbaker said.