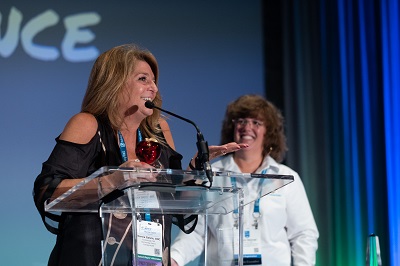 The National Association of RV Parks and Campgrounds (ARVC) recognized the “best of the best” in the outdoor hospitality industry at its annual Awards of Excellence ceremony.

The ceremony, held on Nov. 9 at the 2022 Outdoor Hospitality Conference and Expo in Orlando, began by honoring Plan-It Green Parks of the Year award winners. The award is given to National ARVC member-parks that exemplify environmentally friendly practices across all park operations, the organization said.

The Plan-It Green Friendly Park of the Year award in the small/medium category was given to Park Cuervo Mountain RV and Horse Hotel in Stanley, New Mexico. The large/mega park category was awarded to Santee Lakes Recreation Preserve and Sun Retreats Avalon.

Park of the Year Awards were given in four categories to ARVC member-parks that delivered an extraordinary guest experience because of all-around excellence in operations, professionalism, marketing, customer service, and industry involvement, ARVC said. The winners go the “extra mile” for their guests and the industry.

Park of the Year awards were given for small, medium, large and mega parks.

The award recipients for small and medium parks respectively, are Anvil Campground in  Williamsburgh, Virginia, Jellystone Park of Pelahatchie in Pelahatchie, Mississippi.

The Supplier of the Year Award, which is given each year to an industry supplier that exemplifies excellence, was awarded to Campspot.

The ARVC’s Unity Through Generosity Award, was given to Marcia Galvin of Normandy Farms Family Camping Resort.

The Pioneer Award recognizes early industry leaders and visionaries whose groundbreaking efforts have contributed over the years to the growth and success of the RV and campground sector of the outdoor hospitality industry, ARVC said, and it was awarded to Jay Jamison, Pismo Coast Village RV Resort’s CEO and general manager.

The Stan Martin Award, among the organization’s highest honors, was given to Michael Hobby of Moon Landing RV Park & Marina.