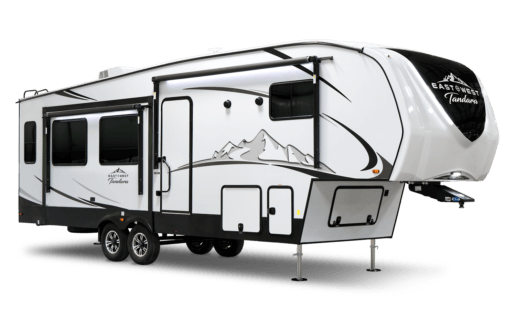 East to West, a division of Forest River Inc., is poised to debut its brand-new mid-profile fifth wheel, dubbed Tandara.

East to West founder and Co-General Manager Lisa Liegl Rees said, “Tandara is a phrase from the Indigenous people of Australia that means ‘camp here’ and perfectly embodies the adventurous spirit of our new fifth wheel brand.”

The Tandara will be available in eight floor plans, six of which will be in production by October. The two remaining floor plans should be in production by the end of the year. All eight floor plans will come standard with vinyl flooring instead of carpet. According to Mark Krol, sales manager at East to West, the Tandara fifth wheels were designed to have more windows on the door side of the RV to give campers better views of their own campsites rather than their neighbor’s.

“We strongly believe the Tandara fifth wheel is built with the best construction techniques and components to minimize warranty problems and maximize customer satisfaction. We have identified the best-selling mid-profile floor plans in the industry, improved each floor plan significantly and loaded them with features that deliver real benefits and competitive advantages,” Krol said. “On top of best-in-class quality, floor plans and features, the Tandara fifth wheel has an alluring exterior and stunningly beautiful interior design we are confident retail customers will fall in love with.”

Tandara fifth wheels will be built in one of the four, 100,000-square-foot production facilities on the sprawling 96-acre East to West campus in northeast Elkhart. Eric Sharp, a 42-year industry veteran and East to West co-general manager, recruited a production team led by plant manager Tom Albert.

East to West travel trailer sales have increased more than 130 percent in the first five months of 2020, according to the most recent report from Statistical Surveys.

“Our entry-level travel trailers, Della Terra and Silver Lake, are growing exponentially, while our laminated travel trailer, Alta, is enjoying a great start in its first year of production,” Rees said. “Creating a new fifth wheel brand at East to West has always been a strategic part of our growth plan, and we are thrilled to have Mark Krol and Aaron Good on our sales team. Their experience in this segment will play huge roles in the success of Tandara.”

“When we looked at the overall fifth wheel market, we decided the best place to enter was the mid-profile fifth,” Krol added. “The logic was to start at the sweet spot and expand from there.”

Dealers interested in representing Tandara in their markets should direct queries to Mark Krol.

Two more Tandara floor plans are to join the lineup by the end of 2020: a front living room model and a bath-and-a-half, rear-bunkroom bunkhouse.

The back half of the first six floor plans are identical, except for the theater seats and entertainment swapping places on outside kitchen models. East to West maximizes efficiency by minimizing options and simplifying production, Krol said.

“It’s overwhelming when there are a million combinations of options,” he said. “We curate decisions to make it easier for our dealers to stock, sell and turn.”

All floor plans have an extra-large pantry with fixed shelves on one side and removable shelves on the other. Consumers can keep all shelves to store food, appliances, etc. They can also choose to remove some shelves and use the larger open space as a coat closet, or to store larger items such as brooms, umbrellas or even large dogfood bags.

The main slide-outs on all models face the camp-side, Krol said. Best-selling floor plans in recent years have trended toward these door-side slides, he said, as campers want windows looking out on their own campsites rather than staring into their neighbors’ coaches.

The standard kitchen island is perfectly sized, he said. It’s big enough to be useful, but it is carefully placed to avoid blocking the view of the 50-inch TV from the theater seats, while also avoiding blocking refrigerator access when the slide-outs are pulled in.