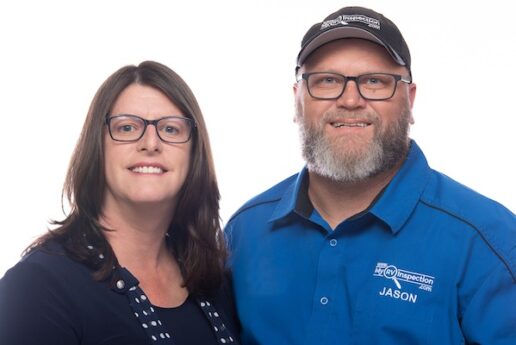 A couple from Florida achieved their master RV inspector certification from the National RV Inspectors Association (NRVIA), the first couple to achieve the certification together.

Jason and Lisa Carletti began inspecting RVs in the Tampa area in August 2017. Together, they have performed more than 600 evaluations.

In 2017, Lisa Carletti was a traveling nurse and Jason Carletti was looking for something to do while she was working. He stumbled upon an advertisement promoting the RV inspection business and attended courses at the National RV Training Academy (NRVTA) with a goal of performing one or two inspections a month.

“I had no idea that this business would take off as quickly as it did to bring in a consistent workload of three to five inspections every week,” Jason Carletti said.

When the business reached the point he needed help, Lisa Carletti also took classes to become an NRVIA certified RV inspector. Working together, they generated enough income for Lisa Carletti to quit her job and focus exclusively on the inspection business.

“Not only did it mean I would not need to punch a clock anymore,” she sid, “but I also did not have to endure the rigors of working in healthcare.”

In addition to performing RV inspections throughout central Florida, the Carlettis were invited to evaluate RVs for the Federal Emergency Management Agency (FEMA) after hurricanes in Florida and North Carolina. FEMA bought RVs as temporary shelters for storm victims, and the couple ensured there were no life-safety or major problems with the vehicles’ systems.

Stephanie Henson, NRVIA’s director of administration, said the certification was launched in January to recognize members who excel in their own inspections, but also in supporting the association.

The Carlettis developed a website to help connect RV owners with a variety of related services, including RV repairs, inspections, parts distribution, storage, transport and even mentorship for new owners. They also train other inspectors how to use RV evaluation software and prepare detailed inspection reports.

“We love working for ourselves and setting our own schedules,” Jason Carletti said. “The income is great, but we both get tremendous satisfaction from helping people feel comfortable about their buying decisions.”

NRVIA members must apply for the master certification, which is reviewed by a committee of experienced inspectors.

To be considered for the credential, applicants must operate an active and insured inspection business for at least two consecutive years; complete 50 verifiable advanced RV inspections; have at least 10 verifiable reviews from clients with a satisfaction rating of 80% or higher listed on a third-party platform such as Google; either publish an article in an industry publication relevant to RV inspections or RV systems training, or present a similar topic at an industry rally, conference or expo; and maintain a professional business website promoting RV inspection services.

For more information about becoming a certified RV inspector or getting an RV inspected, visit www.nrvia.org, email [email protected] or call 855-472-9948.