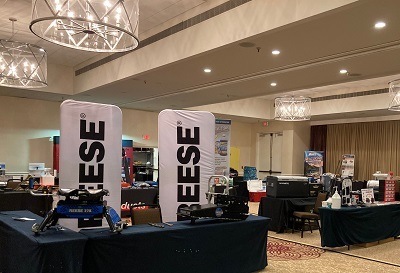 Making split decisions seems to be this year’s theme. Keller Marine and RV found that out last week when its Nov. 12 open house moved to an unexpected venue in Tropical Storm Eta’s wake.

The tent-style outdoor event was originally set up beside the company’s Thonotosassa, Florida, warehouse. By the time the storm hit land, President Mike Keller said the team had six hours to find a safer, indoor location to continue.

“We prayed our way through it,” Keller said. “I called the vendors and dealers I trust and asked, ‘Should I call it?’ They said don’t call it, let’s try to find a different venue.”

A Sheraton hotel about 5 miles from the warehouse had an available conference room. Keller noted the weather eventually turned out better than expected, with hard rains and 40 mph winds.

The company held its open house in the 15,000-square-foot Sheraton space, using time allotments to keep social distancing procedures and traffic flowing, Keller said. Participants got their temperatures checked, an N95 mask if needed and a wristband once cleared at the door.

“Everybody seemed to be comfortable,” Keller said. “I think people that came enjoyed themselves and learned a lot because there was more individual attention, instead of having the greatest turnout ever.”

Booths each with one or two attendees represented 100 total dealers and 35 vendor companies, cycled in throughout the day.

Although the turnout saw less numbers, sales still were good, Keller said. One question in particular was a trend amongst buyers.

“The thing on everybody’s minds is, when will you have it for me?” he said. “For the first time in history, that was the question. Usually it’s how much am I getting off, what’s the deal and can I pay it in six months. Now it’s, yeah that’s great pricing but I need it now, so when can I get it?”

Keller said he feels good about their chances of fulfilling orders quickly, but the anticipation comes from occurrences in prior seasons. It will take the season at hand to get caught up.

With the Open House now in the rear-view mirror, Keller still plans to host its in-person aftermarket show Dec. 15-16 at the Hershey Lodge and Convention Center in Hershey, Pennsylvania.

“I try to have a good outlook for everything, but this is challenging,” Keller said, referencing uncertainties surrounding coronavirus. “You never know what tomorrow brings. I don’t like to make absolutes, so we’re taking a wait-and-see with the idea that we want to do [the event]. Every day is a new day.”