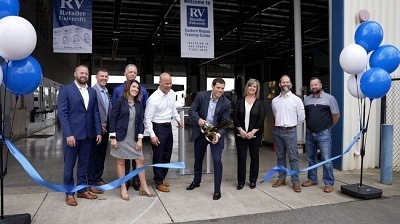 The company’s president and CEO, Jon Ferrando, said the new training center has 20 technician service bays in addition to “high-tech” classrooms that train as many as 100 techs at a time.

“This third best-in-class RVR University Training Center reflects our commitment to investing in our people, a core value that RV Retailer was founded on in 2018,” Ferrando said. “Investing millions on state-of-the-art training facilities is a major investment to ensure we provide our 2,000-plus associates with the right job skills and top-notch career advancement opportunities.”

RVR Chief Human Resource Officer Taylore Elliott said the company’s seven developed programs will be taught at the facility, including service technician and service technician mentor sessions to be hosted during the Charlotte location’s opening week. The RVR University centers will house and train more than 1,000 associates in the next year, she said.

“We are pleased that Lippert Components has provided a uniquely equipped fifth wheel frame to our Charlotte Training Center that will allow service techs to train on both electric and hydraulic leveling and slide out systems, as well as axles and brakes,” RVR VP of Service and Parts Chris Glenn said. “We thank the LCI team for its support of our training.”

RVR completed its buildout of three training facilities in three regional locations to train associates. The stated multi-million-dollar commitment will serve all the store’s functional roles, from service technicians to general managers.

The first training center opened in April in the Dallas/Fort Worth metroplex area at Motor Home Specialties. RVR’s second facility was completed in May in the Salt Lake City market at Sierra RV, which boasts a 32-service bay facility.

The final location was completed in North Carolina at RV One Superstores Charlotte before the summer RV surge. The facilities were selected for more than their location, RVR stated, as they boast some of the largest service facilities in their respective regions with service equipment and tooling for hands-on training.

Facilities are equipped with remote conference capabilities to collaborate with instructors and associates. RVR University’s instructor-led programs will be taught in a classroom setting at the regional training centers.