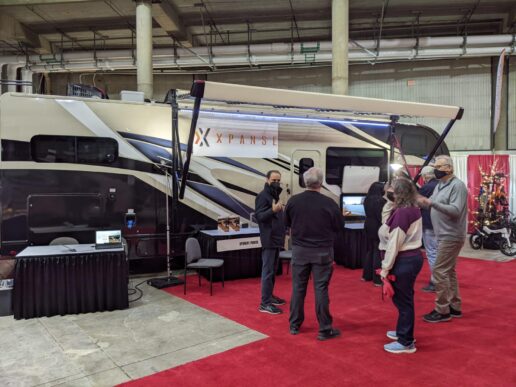 Following its 2021 online launch of Xpanse, a solar awning for RVs, Xponent Power showcased the awning for the first time at the Tacoma RV Show in Tacoma, Washington, Jan. 20-23.

The Tacoma Show attracts more than 15,000 people each year, and attendees this year were among the first to see the Xpanse awning in person.

Rohini Rahunathan, Xponent Power founder, said the awning has generated a lot of interest and demand from customers ranging from RV owners to OEMs.

“Beyond the RV industry,” Rahunathan said, “we are seeing considerable interest from the residential, tiny home and emergency power markets.”

RVers who go off-grid have an increasingly strong but unserved need to adequately power their appliances, according to Xponent.

“Even though Xpanse is available in three power options of 800-watt, 1,000-watt, and 1,200-watt,” Rahunathan said, “the overwhelming majority of pre-orders so far have been for the 1,200-watt version; demonstrating the desire for more power by RVers.”

Xpanse can power onboard appliances, including refrigerators, lights and microwaves. It is compatible with electrical components used in traditional solar installations on RVs, including charge controllers, batteries, and inverters. It can be mounted on either side of an RV and hence provides flexibility to RV owners who would like additional power but are not looking to replace an existing awning. It can also integrate with existing rooftop installations extending the solar power generation capabilities beyond the roof of an RV.