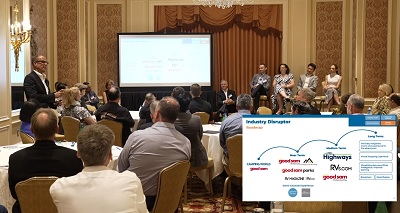 The announcement came during an investor presentation Tuesday in Utah. Camping World will be able to sell new and used RVs through the system, which it has dubbed Highways. However, comparing the system to Carvana, the focus primarily will be on used sales.

The platform will enable seamless online consumer transactions, said Matt Wagner, Camping World senior vice president of RV inventory management, digital marketing, media services and RV dealership e-commerce. Consumers will be able to order any RV from anywhere in the county and have the RV delivered wherever the consumer desires.

“There is nobody in America today – auto dealer, boat dealer, RV dealer, powersports dealer – that will be able to, tomorrow, sell their product, new or used, in every state in America online,” company Chairman and CEO Marcus Lemonis told the in-person investor audience. “When we talk about adding an additional $1 billion of revenue, with a traditional 24% margin that comes with that, in markets where we do not have stores, that is the mechanism and the vehicle. No other dealer will be able to compete with it. Period, end of story.”

Wagner said the program would launch no later than April 2022.

“For us, the brand Highways, which will roll out in the first quarter, hopefully, will be the knockout punch,” Lemonis said. “I promise you we are bracing and preparing for it, both on the service side and the inventory side. I don’t know how you compete.”

Before the launch, Camping World will have licenses to sell RVs in all 48 contiguous U.S. states. Partnerships with transport companies will enable shipments to be delivered anywhere. Because the company will have licenses everywhere, Wagner said crossing state boundaries during transport is not an issue. The company simply will change the paper on which that used asset is transacted on.

Financing will be conducted through an online virtual financing company with which Camping World partners. Wagner said the consumer would need to engage with a customer service agent only at the transaction’s end to provide a digital signature and arrange for delivery/transport.

Camping World will tout its ongoing relationships with more than 3,000 standalone service facilities nationwide, in addition to its own 2,100 service bays across 185 nationwide stores, to provide service to online buyers. The access would reduce issues online buyers trying to gain service from local dealers from which the RVs were not bought.

“Highways is our purely digital transaction framework both for new and used. We expect to execute in all 48 states, with financing happening exclusively online,” Lemonis said. “So, for those of you that are Carvana fans, we think this is maybe even better.”

To feed the online demand Highways is expected to receive, Camping World said it has grown its used inventory substantially over the past year. Today, used inventory is more than $360 million, the company told investors. Last year that total was $130 million.

Other issues addressed during the presentation included: