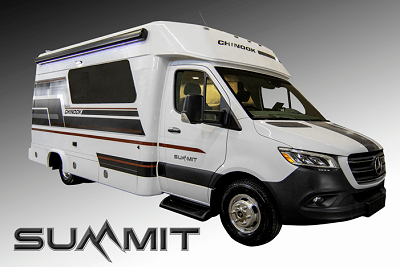 Chinook RV will debut its new Class B-Plus Summit at the Spring RV Outdoor Showcase in St. Louis from April 9-11.

Chinook RV said its engineers looked to the automotive industry to create the Summit’s design. The company also enhanced construction with a steel substructure that incorporates the sidewall and roof.

“This roll-bar-like structure not only ensures a higher level of strength, safety and durability,” the company stated, “but also provides greater insulation.”

Dealer shipments are estimated to begin in the fourth quarter, and the Peru, Indiana-based company said it is accepting pre-orders.

“We went through painstaking detail to pay respect to the history and lineage of Chinook while developing the Summit, even going so far as to use the original tooling and molds to craft the front and back cap,” Chinook RV General Manager of Product Production Jeff Butler said.

Owner and President Phil Rizzio added that the Summit might appear to be a normal B-plus RV, but is more.

“In fact, the word ‘normal’ was left out of the Chinook team’s vocabulary,” he said, “and further observation of the model shows why.”

The Summit’s living room features dual sofas, which open to a king-size bed, and an upgraded entertainment center package. The kitchen includes a refrigerator with doors that open from either side, a convection microwave and induction cooktop.

“With the water tank and waterlines installed inside, you can expect a hot shower, even in freezing temperatures,” Rizzio said. “The Summit team also enclosed and insulated the holding tanks, and added ducted heat, to ensure they can withstand subzero temperatures.”

Chinook RV stated a 5-inch thick, fully bonded roof differentiates the Summit from competitive units, which rely on 2-inch-thick roofs. The Summit includes dual-pane frameless windows and a flooring system with a thermal and moisture barrier.

“Jeff Butler has worked in manufacturing plants to include Monaco in Oregon and Dynamax in Elkhart, and he has put his all into the Summit,” Rizzio said. “John Nelson, fiberglass and R&D manager, came to Chinook RV years ago from Country Coach and has experience and knowledge that most will never achieve. Such experience is evident in the Summit.”