According to the European Centre for Disease Prevention and Control, on Feb. 12 the novel coronavirus was named severe acute respiratory syndrome coronavirus 2 (SARS-CoV-2) while the disease associated with it is now referred to as COVID-19. It is a new strain of coronavirus not been previously identified in humans.

As reported by Business Insider, China has issued the largest quarantine in history to contain the disease. The quarantine covers 16 cities and affects an estimated 45 million people.

The following letter, from WAY Interglobal Network CEO Wayne Kaylor, addresses some of the issues now affecting the RV industry. Many products sourced from China are impacted by company closures and shipping irregularities.

During the past 48 hours, I’ve been meeting with RV manufacturers in order to provide them with updates on the impact of the coronavirus on the RV OE supply chain.

We continue to receive updates hourly and as we monitor the ongoing effects of the outbreak, I will pass them on to the RV community. The impact is likely to affect many supplier companies, not just Way Interglobal.

This may in turn trickle on to RV manufacturing. In my 30-plus years of dealing with product fulfillment through Asia — and most specifically China — the circumstances surrounding the coronavirus are unprecedented.

Here are the most recent updates as of Feb. 13 (China time).

Very few factories have returned as planned to production this week. The ones that have are taking extra precautions to quell the virus. In some factories, workers who returned to work are required to work up to 6 feet apart and wear masks to help reduce the spread of the virus.

The delay of workers returning to work after the national Chinese New Year Holiday is normally two- to three-weeks. The length of time is greater this year and is impacting the normal flow of goods to the U.S. market.

Now, with the unprecedented extended “closing” of China and its manufacturing base currently at two weeks beyond normal— with indications it will stretch to four-plus weeks before resuming — the situation will only get worse.

Here are some things to consider. According to the publication Journal of Progress:
Carriers are reducing the number of ports calls each week on various ocean vessel services through their “blank sailing” and “cancelled sailing” programs.

“Blank sailings” are defined as a vessel that skips single or multiple scheduled ports where they pick up freight during a vessel’s rotation. This means a vessel might intend to go to Shanghai-Ningbo-Qingdao and then to U.S. ports but in reality skips one or more ports. As an example, a “blank sailing” vessel might skip Shanghai during the loop, not picking up cargo.

A “cancelled sailing” might skip an entire set of Asian ports. The vessel may simply remain in one location for an extended period of time or change its schedule to perform some role other than delivering cargo to the U.S. It may instead move empty containers from one port to another or switch its port schedule entirely for one loop. It may even cancel an entire weekly service.

The Journal of Progress said blank and canceled sailings will leave gaps in the preferred service used each week and will now, and in the near future, require companies to look for alternative delivery options. Less space available could influence future shipping rates with more likely GRIs or emergency upcharges.

Once merchandise is once again rolling off production lines, BCOs will face an unprecedented number of blank sailings from Asia to North America. In this week’s Sunday Spotlight, Alan Murphy, CEO of Sea-Intelligence Maritime Consulting, said carriers have announced 82 canceled sailings into March. That number could increase.
“With increasing announcements in the past 24 hours of factories extending closure periods further,” Murphy wrote. “It seems likely that the number of blank sailings might also escalate in the coming week.” 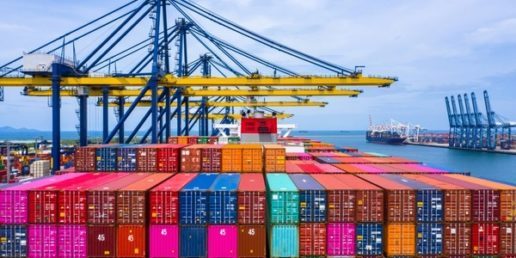 Trans-Pacific services from Asia to the West Coast will be the hardest hit. “There will be a staggering 62 blank sailings on the Asia-North America West Coast trade lane,” Murphy said. “Nineteen are related to the coronavirus outbreak,”

Carriers have announced 20 blank sailings to the East Coast, 18 of which are due to Lunar New Year factory shutdowns. Two blank sailings were caused by the virus.

Global Port Tracker, which is published monthly by the National Retail Federation and Hackett Associates, estimated January 2020 containerized imports at U.S. ports declined 3.8 percent when compared to January 2019. They are projected to fall 12.9 percent in February and 9.5 percent in March year-over-year. Global Port Tracker projected that year-over-year import increases will resume in April, but the first half of 2020 will ultimately be down 0.4 percent when compared to the first six months of 2019.
In an advisory by Swire Shipping it was noted that 14-day quarantine periods for vessels that call China must also be taken into consideration when projecting oceanic vessel arrivals.

“These restrictions may lead to delays caused by changed rotations or longer transit times,” Swire said.

Logistics experts emphasized that conditions in China, the rest of Asia, and in the trans-Pacific shipping arena remain fluid, especially for any services touching China, so BCOs should maintain close contact with transportation consultants for regular updates. Way Interglobal will certainly be following this advice. I suspect many other RV importers will as well.

An increase in ocean rates may also be coming. However, with diminished volume because of the Coronavirus, rates could also remain consistent or even decrease because of diminished demand.

In South China and Ningbo, factories and agents are not receiving approval to re-open until February 17, or even later in some cases. I’ve heard the date of the 24th tossed around.

Here is a scatter shot of other things I’m hearing regarding this issue. Many Chinese business partners are working from home because offices have not re-opened. Secondary ports in India, Malaysia, Indonesia and Thailand are starting to face greater delays at transshipment ports, due to everything I’ve already mentioned.

The biggest questions I am being asked by RV manufacturers are: “When will it end?” and “How will this affect us?”

Unfortunately, neither I nor anyone else knows at this point. While all suppliers try to carry a buffer stock of 30 to 90 days, I am doubtful anyone had planned for an additional 30- to 45-day delay over and above the New Year holiday. Supplies will become very restricted at some point.

What can we do? Monitor the situation and hope for the best as scientists continue to work on a solution for the coronavirus. If factories find a means to get back into production in the next two weeks, we may yet weather the storm.

We will continue to monitor the situation and keep you appraised of changes as they happen.

With over 25 years of importing, manufacturing and sourcing in Asia, Wayne’s core background knowledge and global network have allowed for hundreds of new products to be manufactured from concept through final product, all with quality design and engineering along the way.

Prior to Global Purchasing Solutions, Inc. Wayne was founder and president of National Supply, a single-location building products supplier to the RV and manufactured housing markets in Elkhart, Indiana. Before founding National Supply he was a founder of TriStar Distributing, the largest OEM electronics distribution company in the United States. The company was headquartered in Goshen, Indiana with branches in Redlands, CA, Lancaster, PA, Eugene, OR, Canon, GA, and Ft. Worth, TX.

Wayne sold TriStar in 1999 to a holding company and stayed on as president of the group of businesses under the holding company through 2001. Wayne is the father of two, and he and his wife live in beautiful southwest Michigan.